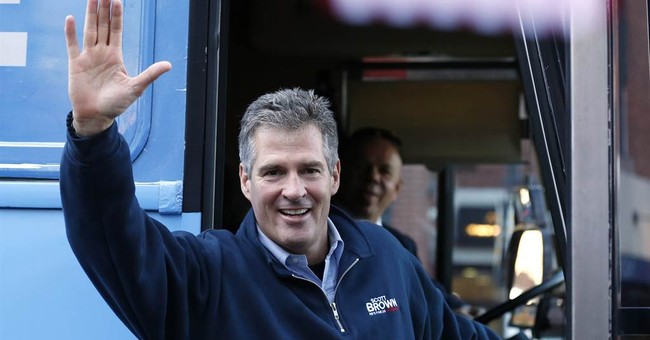 Now, I’m sure the last thing you probably want to read about this morning is another post about a moderate, ex-Republican Senator from Massachusetts, but bear with me. This might be important:

Sen. Scott Brown has a new site (and has dropped the "MA" from his @SenScottBrown Twitter handle). #tealeaves http://t.co/WMJBa9gG5v

And here’s why this concerns you:

That’s the message currently up on the former Massachusetts senator’s website, scottbrown.com. The site is currently under construction, but has a new slogan at the top: “Scott Brown: Giving Power Back to the People.”

Brown has been mulling a Senate bid in New Hampshire for months — GOP operatives believe he’s the only chance the party has of a competitive race against incumbent Democratic Sen. Jeanne Shaheen.

The pol visited the state for a New Hampshire GOP fundraiser in Nashua last month, further feeding the speculation that he is seriously considering a bid. The under-construction website is perhaps another hint that he’s gearing up for something new.

"They only chance?" Geez Louise. Get in there, Scottie.

Incidentally, Brown’s been throwing head fakes as to whether or not he’ll run for months. GOP officials in New Hampshire want a definitive answer -- but he’s not giving in. Could these latest developments, then, be proof he’s actually serious about making it official? After all, why sell your house, change your Twitter handle, headline swanky fundraisers in New Hampshire, and build a new website only to bow out sometime down the road? Seems unlikely. Remember, Republicans need to (net) win six senate seats to recapture the upper chamber.

A pick-up in New Hampshire would be huge.