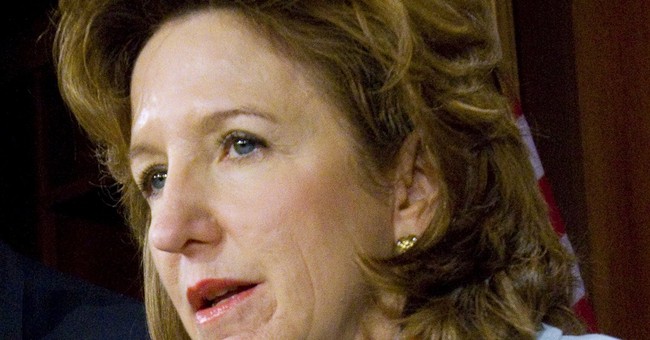 No wonder she’s avoiding the president’s speech today. A new left-leaning PPP poll -- which had, by the way, a D+10 sample -- shows embattled Sen. Kay Kagan (D-NC) losing to every single Republican challenger vying for her job in 2014. All of these candidates are relatively unknown, and all of them are polling slightly ahead of her.

The general election picture has entered into a holding pattern over the last three months, with Kay Hagan trailing her potential Republican opponents by small margins as she continues to suffer from poor approval ratings.

But why, exactly, is she losing -- and why are independents in particular less inclined to support her candidacy? Oh, right:

Hagan's main issue is that with independents she has a 30/56 approval rating and trails all of her opponents by double digits. Unpopularity of the Affordable Care Act seems to be driving much of her trouble. Only 38% of voters in the state overall support it to 48% who are opposed, and independents are more against it than the overall electorate at 31/57. 61% of voters think its implementation has been unsuccessful to 32% who deem it a success. Those numbers have actually been slowly moving in a positive direction for Democrats though. The percentage of voters rating it unsuccessful has declined from 69% in November to 65% in December to the new 61% mark.

Yes, but so what? Her electoral prospects aren’t really improving. In fact, the percentage of North Carolinians who say they support Obamacare is below the national average -- a mere 38 percent -- and what’s more, her approval ratings have plummeted five percentage points since November. How could this possibly be construed as anything other than unwelcome news? Nevertheless, the pollsters believe this race is probably still a “toss up”:

This race continues to look like a toss up, but Hagan could definitely use a change of topic from Obamacare to help get her numbers out of this rut.

Don’t expect that to happen. Republicans understand this is a winning issue and they're not going to forget.