Poll: "Liberal Self-Identification" on the Rise

More Americans than ever before self-identify as “liberals” today, a new Gallup study finds. This is the highest percentage ever measured since 1992 -- when the pollsters first began conducting their surveys:

But fear not, conservatives. You are well represented. For now, that is:

The rise in liberal identification has been accompanied by a decline in moderate identification. At 34% in 2013, it is the lowest Gallup has measured, and down nine points since 1992. Moderates had been the largest ideological group throughout the 1990s, and competed with conservatives for the top spot during the 2000s. Since 2009, conservatives have consistently been the largest U.S. ideological group.

The percentage of conservatives has always far exceeded the percentage of liberals, by as much as 22 points in 1996. With more Americans identifying as liberals in recent years, and conservative identification holding steady, the conservative advantage of 15 points ties the 2007 and 2008 gaps as the smallest.

But that may soon change. According to Gallup, since 2007 Democrats have become increasingly more emboldened, unafraid to proudly proclaim their progressive leanings. In other words, Democrats are moving to the Left: 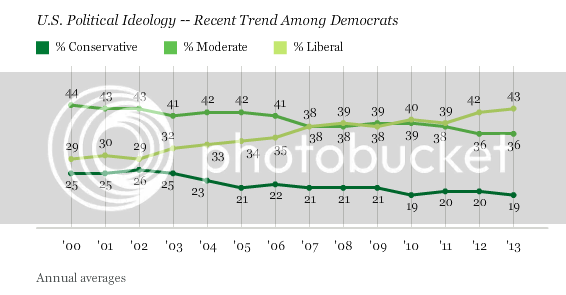 A key morsel from the study:

These changes are a telling indicator of the shift in the Democratic Party from a party that was more ideologically diverse to one that is increasingly dominated by those from the left end of the ideological spectrum.

At the same time, Republicans, since the turn of the century, are more inclined to use the word “conservative” to describe their political views:

Republicans have become more likely to describe their political views as conservative over the past 13 years, from 62% in 2000 to 70% in 2013. The percentage of Republicans saying their political views are moderate has dropped by an equivalent amount, from 31% to 23%. To some degree that may be a function of declining Republican Party identification in the U.S., now at a 25-year low of 25%. The smaller group of present Republican identifiers is likely more ideologically homogeneous than the larger group of Republican identifiers from a decade ago.

Bottom line: the country is becoming more and more polarized. But I suspect you already knew that.