Federal Agency: The Term “Redskins” is a “Derogatory Slang” 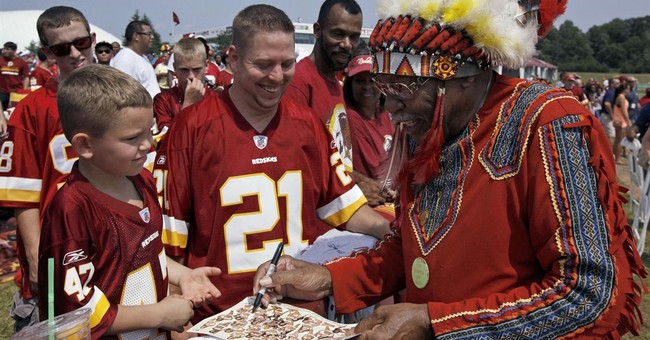 A company applying for a trademark to name their product “Redskins Hog Rinds” has been turned down by the U.S. Patent and Trademark Office. Why? Because the federal agency considers the term to be offensive and derogatory:

There will be no trademark for “Redskins Hog Rinds,” a bad omen for the Washington Redskins in the legal battle over their name.

The U.S. Patent and Trademark Office has rejected a request from a company to sell pork rinds using the word “Redskins” because it deemed the term to be “derogatory slang.”

In a letter dated Dec. 29, the agency wrote: “Registration is refused because the applied-for mark REDSKINS HOG RINDS consists of or includes matter which may disparage or bring into contempt or disrepute persons, institutions, beliefs, or national symbols.”

The same agency is deliberating whether to revoke the trademark protection for the NFL team, part of a long-running challenge from a group of Native Americans. A hearing was held in March, and a decision is expected soon.

If the board rules against the Washington Redskins, the team wouldn’t be forced to change its name but would lose its registered trademark status, which helps protect it from individuals looking to sell merchandise with the word on it.

In other words, anyone could put the word “Redskins” on a product, distribute it, and make money at the team’s expense. That would undoubtedly affect the organization’s bottom line. And given the Redskin’s less-than-impressive season last year, that’s probably the last thing they want to let happen.