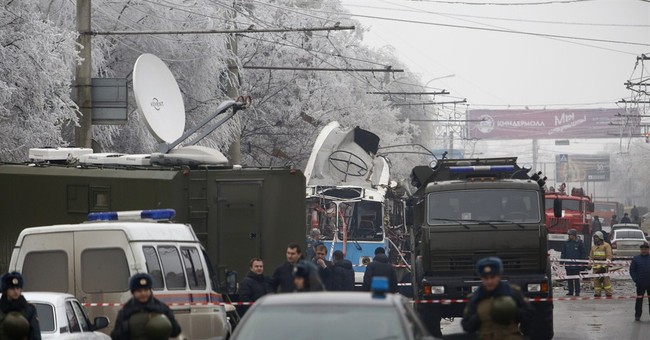 The city formerly known as Stalingrad suffered two presumed terrorist attacks in a twenty-four hour period. Dozens have been killed and many more have been wounded. The suicide bombings come only weeks before Russia is slated to host the 2014 Winter Olympics, and startlingly, it was the third terrorist attack in less than 96 hours:

Another deadly blast has rocked the Russian city of Volgograd, killing at least 14 people aboard a trolleybus during today's morning commute. The explosion comes a day after a suicide bombing in the city killed at least 17 people and injured more than 40.

At least 14 people died in the trolleybus explosion and at least 28 people injured, according to the Russian Health Ministry. A 5- to 7-month-old baby suffered multiple head injuries and was unlikely to survive, Health Minister Veronika Skvortsova said. The baby's gender has not been disclosed.

A total of 27 people are in hospitals, including three children, Skvortsova said. The condition of most patients is "from relatively satisfactory to moderately severe," she added.

Based on the evidence, experts and government officials suspect the bombings were linked:

The blasts on Sunday and Monday were probably connected because the TNT and shrapnel-packed bombs were "identical," said the spokesman for Russia's main investigative agency.

"That confirms the investigators' version that both terrorist attacks were linked," Vladimir Markin told Russian television. "They could have been prepared in one place."

The remains of the presumed bomber had been collected and were being examined, he added.

Surely these attacks will raise questions about the security and safety of Olympians and spectators alike before, during, and after the Winter Games. That’s why President Putin is taking matters into his own hands:

Russian President Vladimir Putin had already deployed tens of thousands of soldiers, police and other security personnel for the games and implemented extensive identity checks and security measures. A security zone created around Sochi for the games extends 60 miles along the Black Sea coast and up to 25 miles inland. Russian troops will patrol the mountains that loom above the resort, drones will be deployed over Olympic facilities and cars will be banned from the zone starting a month before the games begin until a month after they end. On Monday, Putin announced that even more security forces would be deployed.

But who is responsible for the attacks? No one has yet claimed responsibility, but the government suspects jihadist Doku Umarov is behind the bloodshed:

In July, Doku Umarov, the leader of the Chechen group Caucasus Emirate, released a video statement in which he vowed to unleash "maximum force" to disrupt the games at Sochi.

The U.S. State Department considers the Caucasus Emirate a foreign terrorist group and has authorized a reward of up to $5 million for information leading to the location of Umarov.

The State Department said Umarov organized a suicide bombing outside the Chechen Interior Ministry in May 2009.

His group also claimed responsibility for the 2011 bombing of Domodedovo Airport in Moscow that killed 36 people, the 2010 bombings of the Moscow subway that killed 40 and the 2009 bombing of the high-speed Nevsky Express train in which 28 people died.

In October, a bomber blew up a passenger bus in Volgograd, killing six people and wounding more than 30 others. Russian media reported that a female Islamist suicide bomber from the Russian region of Dagestan was responsible for that attack.

"Most of the militants responsible for terrorist attacks in Russia over the last decade -- including female suicide bombers who have taken part in 20 attacks claiming at least 780 lives since June 2000 -- have come from Dagestan," RIA Novosti reported Monday.

As CNN notes, you might recall that the Boston Marathon bombers lived in Dagestan for a short period of time, an indication that Umarov’s terrorist cell is attracting and radicalizing men (and women) from across the globe.

At this time, there are no plans to scrap or delay the Olympic Games.