Guess: Who is the Only "Top Congressional Leader" to Exempt Some Staffers From the ACA? 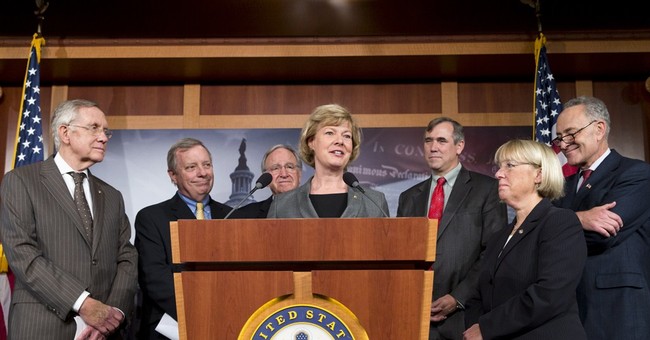 Democratic Senate Majority Leader Harry Reid, one of Obamacare's architects and staunchest supporters, is also the only top congressional leader to exempt some of his staff from having to buy insurance through the law's new exchanges.

Reid is the exception among the other top congressional leaders. GOP House Speaker John Boehner, House Democratic Leader Nancy Pelosi and Senate Republican Leader Mitch McConnell have all directed their staffs to join the exchange, their aides said.

To recap, the law mandates that every American must purchase health insurance or pay a fine-- unless, of course, one is granted an exemption. But who are the types of people who are granted exemptions? Are they hard working, middle class Americans living outside-the-beltway? Nope. They are the politically connected who have the money, influence and lobbying teams to do their bidding. Now, of course, most Congressional leaders (all save one, it seems) recognize that forcing all Americans to comply with an unpopular federal statute while not subjecting their entire staffs to the same fate is wrong and unfair. Even top Congressional Republicans (who cannot and should not be held directly responsible for the Affordable Care Act) are throwing their employees into the exchanges. So yes, while “some” of Reid’s staffers will obviously lose their current plans so that they can get “better” ones, not all of them will:

In September, Reid told reporters, "Let's stop these really juvenile political games -- the one dealing with health care for senators and House members and our staff. We are going to be part of exchanges, that's what the law says and we'll be part of that."

That's true. Reid and his personal staff will buy insurance through the exchange.

But it's also true that the law lets lawmakers decide if their committee and leadership staffers hold on to their federal employee insurance plans, an option Reid has exercised.

I’m not sure that’s how most Americans will see it. In short, Reid’s playing with fire here even if he’s merely “following the law.” Obamacare is already bringing enough negative attention to Democrats. So why on earth would he want to pick a fight with Republicans over this issue?

Now, there’s a chance he’ll reverse his decision in the coming weeks. But don’t count on it. Team Obama is going to have their hands full persuading him to change his mind.