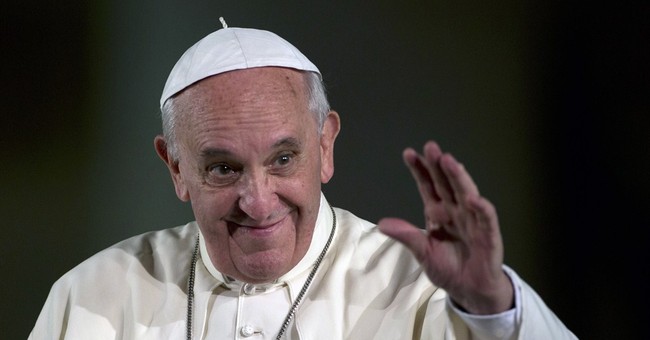 Conservative Catholics who hoped Pope Francis would adopt the same methods and tactics as his two predecessors are sorely disappointed. This is why one self-professed traditionalist recently informed the New York Times she actually threw away her Pope Francis prayer card, presumably because she’s unhappy with the direction of his pontificate thus far:

When Pope Francis was elected in March, Bridget Kurt received a small prayer card with his picture at her church and put it up on her refrigerator at home, next to pictures of her friends and her favorite saints.

She is a regular attender of Mass, a longtime stalwart in her church’s anti-abortion movement and a believer that all the church’s doctrines are true and beautiful and should be obeyed. She loved the last two popes, and keeps a scrapbook with memorabilia from her road trip to Denver in 1993 to see Pope John Paul II at World Youth Day.

But Ms. Kurt recently took the Pope Francis prayer card down and threw it away.

“It seems he’s focusing on bringing back the left that’s fallen away, but what about the conservatives?” said Ms. Kurt, a hospice community educator. “Even when it was discouraging working in pro-life, you always felt like Mother Teresa was on your side and the popes were encouraging you. Now I feel kind of thrown under the bus.”

In the eight months since he became pope, Francis has won affection worldwide for his humble mien and common touch. His approval numbers are skyrocketing. Even atheists are applauding.

And perhaps that is the problem for some Catholics. Conservatives lauded Blessed John Paul II and Pope Emeritus Benedict XVI in part because it was undoubtedly clear where they stood on matters related to the Magisterium. There was never any ambiguity. Just last Christmas Benedict came under heavy fire for a speech he delivered defending family values and traditional marriage. The Left reacted pretty much as you'd expect.

But given everything we now know about Francis -- that is, the way he evangelizes and spreads the Gospel -- it’s difficult to imagine him delivering that speech. Does that mean he doesn’t believe in everything his predecessor said? Absolutely not.

But not every Catholic is convinced:

Steve Skojec, the vice president of a real estate firm in Virginia and a blogger who has written for several conservative Catholic websites, wrote of Francis’ statements: “Are they explicitly heretical? No. Are they dangerously close? Absolutely. What kind of a Christian tells an atheist he has no intention to convert him? That alone should disturb Catholics everywhere.”

In an interview on Friday, Mr. Skojec said he was overwhelmed by the positive response to his blog from people who said they were thinking the same things but had not wanted to say them in public. He said he had come to suspect that Francis is a “self-styled revolutionary” who wants to change the church fundamentally.

“There have been bad popes in the history of the church,” Mr. Skojec said. “Popes that murdered, popes that had mistresses. I’m not saying Pope Francis is terrible, but there’s no divine protection that keeps him from being the type of guy who with subtlety undermines the teachings of the church to bring about a different vision.”

There is little doubt that Pope Francis’ off-the-cuff remarks can sometimes be easily misinterpreted. Take, for example, the two state lawmakers from Illinois who distorted and twisted his words just last week to advance their own agenda.

Illinois lawmakers voted to approve a same-sex marriage bill on Tuesday in a historic vote that concludes over a year of intense lobbying from both sides, reports the Chicago Tribune.

The Tribune identified two key events this year that may have contributed to the affirmative vote -- first, the Supreme Court decision that ruled the Defense of Marriage Act as unconstitutional, and second, the tolerant remarks of Pope Francis about homosexuality, namely his statement "If someone is gay and he searches for the Lord and has good will, who am I to judge?"

The Pope's remarks have definitely made an impact, as some Catholic lawmakers who were initially undecided about the bill specifically cited his example when discussing their decision to support it. Rep. Linda Chapa LaVia (D-Ill.) commented, "As a Catholic follower of Jesus and the pope, Pope Francis, I am clear that our Catholic religious doctrine has at its core love, compassion and justice for all people."

The most notable statement came from Catholic Speaker of the House Michael Madigan, who echoed the Pope's words when explaining his support for the bill, stating, "For those that just happen to be gay — living in a very harmonious, productive relationship but illegal — who am I to judge that they should be illegal?"

Pope Francis has said himself unequivocally he is a “son of the church.” That is to say, he believes in promoting and defending Catholic moral teachings as laid out in the Catechism. True, twisting his words is an effective political strategy for left-leaning politicians -- but it is by no means evidence that Pope Francis is purposefully undermining or watering-down Catholic doctrine. Not by a long shot.