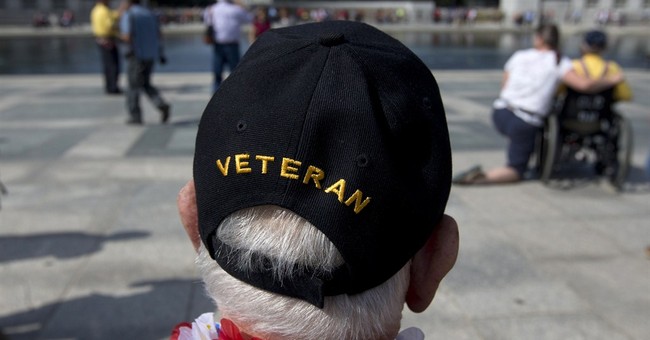 That’s an awful long time to wait to be recognized. But wait Frank Andrews did. Patiently. For many years. Until this past weekend when he was finally honored for his service.

A 94-year-old World War II veteran was rewarded for his patience with a surprise ceremony by the Army after waiting 68 years to receive his service medals.

Frank Andrews, a Chicago resident, was drafted in 1943 and served in the infantry and Air Force as a signalman. He was injured twice and discharged in 1945, but not before racking up the Purple Heart, Good Conduct Medal, American Defense Service Medal, American Campaign Medal, WWII Victory Medal and the European-African-Middle Eastern Campaign Medal for his service, the Chicago Tribune reports.

After he returned home, Andrews never received the medals, but didn’t ask for them, either.

"I had a son who was 3 years old and I didn't have a job and I had to go and hustle, so medals didn't mean anything back then," he said.

Andrews retired from a career in the Postal Service and, in 1984, filled out paperwork to obtain the medals after speaking with other veterans.

Andrews got a response that the medals were out of stock, but figured the Army would send them over when they were ready, the Chicago Tribune reports.

Earlier this summer, Andrews finally got his medals after bringing up the issue with his son and making a few phone calls.

On Sunday, more than 150 people, including his family, local officials and more than 80 members of the military, surprised Andrews with a ceremony filled with military pomp, color guard and music at the Army's 85th Support Command in Arlington Heights.

"I thought they were going to present me with the medals and then say 'Adios,'" Andrews told the Chicago Tribune. "This was a complete surprise. I never expected this."

Despite having risked his life in two major military engagements -- the invasion of Normandy and the Battle of the Bulge -- Andrews never entertained the idea of obtaining his medals right when he returned home. Remarkable. No wonder we call veterans of the Second World War the “Greatest Generation.”