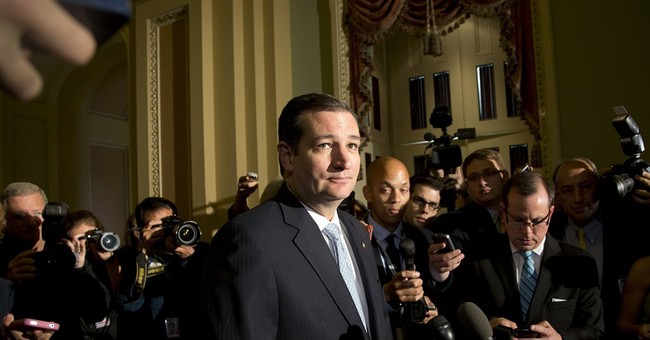 There’s no good way to spin these numbers so I'm not even going to try. For example, the public’s opinions of both the Republican Party and Tea Partiers in general have sunk to historical new lows, according to a Washington Post/ABC News poll out today:

The tea party fares just as badly. Barely a quarter of the public has a favorable image of the movement, the lowest rating in Post-ABC polling.

The shutdown occurred after Republicans tried to add the defunding of Obama’s health-care law to a short-term measure to keep the government running, then followed with other proposals that were rejected by the Democratic-controlled Senate and the president. Only when facing a deadline over the government’s ability to borrow money to pay past bills was there an agreement to end the shutdown and allow borrowing until early next year.

Most Americans, meanwhile, blamed Republicans for the stalled budget talks:

That being said, Democrats hardly came out of this thing unscathed. Their hardline, we-won’t-negotiate-with-a-gun-to-our-heads attitude during the shutdown evidently backfired. Indeed, the party’s unfavorable ratings have climbed to historic new heights:

Congressional Democrats also sustained damage to their image. More than six in 10 respondents disapprove of how they handled budget negotiations, and unfavorable ratings of the party have risen to a record high of 49 percent. Still, President Obama’s overall ratings have held steady. Almost half of all Americans approve of the way he has handled his job, and an almost identical number disapprove.

Republicans, one assumes, would hope these aforementioned numbers would be somewhat of an outlier. But they're not. A USA Today/Princeton Survey Research poll also released today confirms the opposite: the public largely holds them responsible for the impasse (via Politico):

The poll also found Republicans taking the blame for the shutdown: Americans said the GOP was responsible over Democrats 39 percent to 19 percent, with 36 percent blaming both parties equally.

In the aftermath of the partial government shutdown and debt ceiling debate, both Republicans and Democrats in Congress get low job approval ratings, but Republicans fare worse.

The recent budget negotiations have made 64 percent of Americans pessimistic about Congress' ability to deal with future issues affecting the country; only 11 percent are optimistic.

Tea party adherents were front-and-center during the shutdown, and views of the movement have become more negative. Just 14 percent of Americans now hold a favorable view of the tea party, down from 18 percent as the government shutdown began, and unfavorable views are up 7 points. Half of Americans still hold no view of the tea party or aren't familiar with it, even after the high-profile political battles.

Put simply, both parties (but especially conservative Republicans) were blamed for what happened. This makes one seriously question the wisdom of forcing another government shutdown in January if and when things don’t go Republicans’ way.