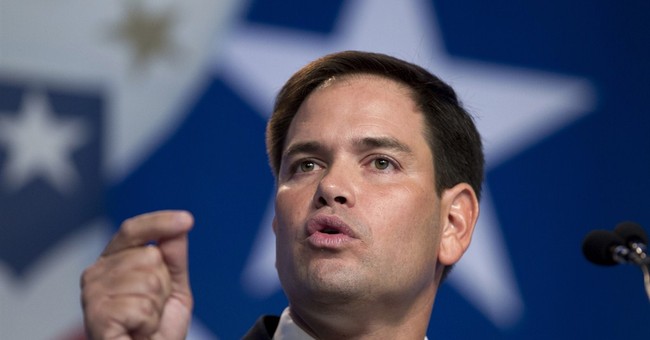 We haven’t heard much from Florida Senator Marco Rubio lately. But on Fox News Sunday he did endorse Senate Minority Leader Mitch McConnell (R-KY) for re-election (via The Corner):

Rubio has a reputation for displeasing some members of his caucus. The most obvious example was his continued support for (and defense of) the flawed immigration bill earlier this year that eventually passed in the Senate. But perhaps Tea Partiers will forgive his most recent “betrayal.” After all, he’s not the only conservative to publicly back McConnell thus far (fellow Kentucky Senator Rand Paul has already endorsed him) nor will he be the last. Others will likely follow suit, although McConnell was probably disappointed to learn he did lose a key endorsement last week:

McConnell is facing a primary challenge in his home state of Kentucky from businessman Matt Bevin, who was endorsed by the influential Senate Conservatives Fund on Friday.

"Matt Bevin is a true conservative who will fight to stop the massive spending, bailouts, and debt that are destroying our country. He is not afraid to stand up to the establishment and he will do what it takes to stop Obamacare,” Senate Conservatives Fund Director Matt Hoskins said in a statement.

But McConnell said he’s skeptical of attacks from the far-right.

"I've endured millions of dollars in attack ads that have called me a right-wing fanatic over the years. I think my opponents in the primary are going to have a hard time convincing Kentucky primary voters that I'm some kind of liberal," McConnell said on CBS’s “Face The Nation.”

I do too. The Tea Party’s contempt for him is not exactly a secret. But unseating him is not going to be easy, either.