Are Republicans Giving Up on Ken Cuccinelli? 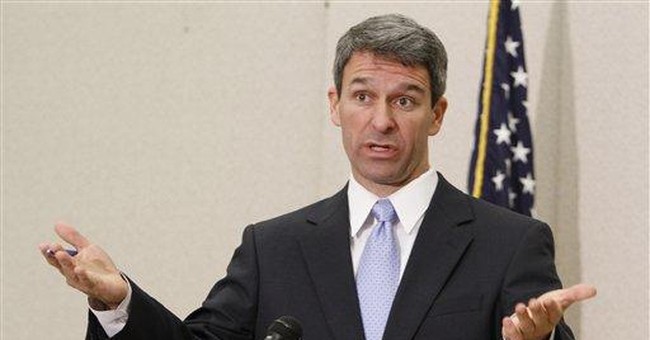 Two weeks to go until Election Day and Republicans in Virginia are seemingly calling it quits on the most important race in the state. Seriously?

National Journal has the scoop:

As the Republican candidates for governor and lieutenant governor of Virginia fizzle in the polls, the GOP is turning to its equally conservative but little-known nominee for attorney general as the last line of defense against a complete washout in the Nov. 5 election.

Unlike his fellow Republicans on the ticket, Obenshain is running even and possible ahead in campaign contributions and public opinion against his Democratic rival, Mark Herring.

"This Obenshain thing is very real in Virginia and as the governor's race becomes less of a race, the attorney general's race seems to be the talk," said Chris Jankowski, president of the RSLC. "Donors are starting to see that Obenshain can get across the line with some more support, and we're obviously the biggest investor."

A string of polls showing Democrat Terry McAuliffe beating Republican Ken Cuccinelli by seven to 10 percentage points in the governor's race is forcing Republicans to contemplate losing the lock on state government they hold for only the second time since the Civil War. Republicans currently control all of the statewide offices outside the two Senate seats – governor, lieutenant governor, and attorney general – and both the House of Delegates and the Senate. That's a point of pride and a practical advantage for the Republican Party in a major battleground state, though Democrat Barack Obama carried Virginia in the last two presidential elections.

So the GOP is starting to put all their eggs in the Mark Obenshain basket, huh? This sort of strategy is not unlike what Team Romney did at the end of the last election cycle -- that is, when they misguidedly divided their forces and sent precious resources to states in which their candidate had little or no chance of winning. Only in this particular case, they’re spending the money on other candidates (although, in fairness, the explicit purpose of the RSLC is to elect down-ballot office-seekers). Nonetheless, the point is that Cuccinelli hasn’t lost yet. And while he does trail in the polls by seven or eight points, this thing isn’t over. So perhaps one reason this is happening is because Republicans are urging their donors to send their checks elsewhere?

But while McAuliffe has outgunned Cuccinelli on television with attack ads portraying him as an extremist, Obenshain's opponent has struggled to get a similar message out. In a recent Quinnipiac University survey, 46 percent of likely voters said Cuccinelli is too conservative; 71 percent said they did not know enough about Obenshain to form an opinion.

"As voters start to tune into these down-ballot races, they will see that Obenshain would be a continuation of Cuccinelli," said Kevin O'Holleran, Herring's campaign manager. "The whole Republican ticket is totally outside the mainstream."

Hmm. Admittedly, I’m not a political operative who understands the finer nuances of electoral politics. But I’ve seen political candidates overcome seemingly insurmountable odds and win. It’s not impossible. Yes, Terry McAuliffe is well funded and has the backing of the Clintons. But he’s also a tax-and-spend liberal of questionable moral character who happens to support late-term abortion. In other words, he’s not a very good candidate. Is this really who conservative Virginians want as their next governor? I didn’t think so.

Basically, Republicans shouldn’t give up on Ken Cuccinelli so easily -- even if he is having trouble locking up some much-needed endorsements.