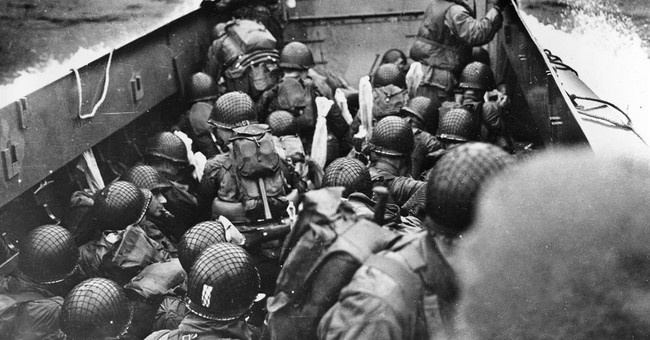 After closing a number of national monuments -- including, of course, the World War II Memorial in Washington, D.C. -- the U.S government is now officially stopping grateful patriots and tourists from visiting the Normandy American Cemetery and Memorial in France. I find this incredibly embarrassing, don’t you?

PARIS (AP) — Tourists travelling to Omaha Beach to pay their respects to the 9,387 military dead at the Normandy American Cemetery and Memorial will find it closed, a victim of the U.S. government's partial shutdown.

The site overlooking the D-Day invasion beaches is one of 24 U.S. military cemeteries overseas that have closed to visitors since Monday. Ten more cemeteries in in France, as well as others in various European countries as well as Mexico, Panama, Tunisia and the Philippines, will remain closed for the duration of the shutdown.

The cemeteries are maintained by the American Battle Monuments Commission, set up after the First World War. Nearly 125,000 U.S. servicemen and women are buried at its cemeteries, and an additional 94,000 are commemorated on tablets of the missing.

In other words, we can somehow find additional resources to send federal workers to the National World War II Memorial to stop aged veterans from touring a monument build in their honor -- but we can’t come up with enough dough to keep open the first and most hallowed American battlefield on European soil? Priorities. This whole situation smacks of politics. Then again, I also realize the administration can credibly chalk up this lamentable shut down as standard operating procedure -- after all, the government is partially shut down. But at the same time, this national embarrassment (how else to describe it?) highlights Americans' collective frustration with our elected representatives. Because members of Congress can’t broker an agreement (our president said as recently as yesterday he wouldn’t even negotiate with the Republican opposition) veterans, families, and their loved ones won’t be able to tour one of the most historic and most famous American cemeteries in the entire world -- not to mention all the other Americans whose lives have been negatively impacted. Small wonder Congress’ approval rating is hovering at historic lows. Surprised?