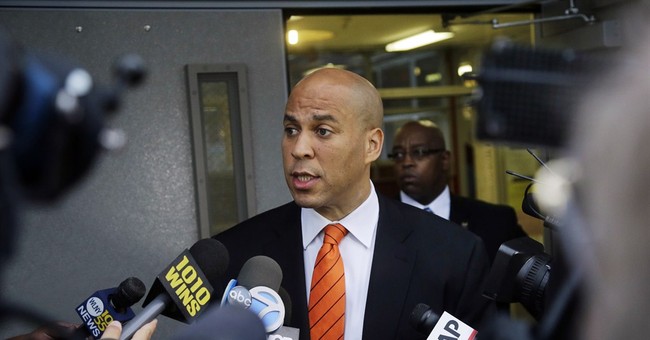 Rich Lowry has the details over at National Review Online:

Newark mayor Cory Booker has a very active imagination. Eliana Johnson demonstrated that with her report on Booker’s moving, highly detailed accounts of his involvement with “T-Bone,” a hard-luck drug dealer who Booker admitted to a friend is a fiction.

So count us as a little skeptical about heart-wrenching stories told by Cory Booker that happen to serve his rhetorical purposes. That is why Eliana has gotten interested in the case of Wazn Miller. In the sort of tragedy all too common in our cities, Miller was gunned down in Newark in 2004 in a murder that has never been solved.

Almost no one would have heard his name if Booker hadn’t repeatedly told the story of his last minutes. According to Booker, he heard shots in his neighborhood, Miller stumbled backwards and collapsed into his arms, and then died, as Booker whispered into his ear, “Stay with me, stay with me.”

Now, we have no idea of the truth of this account, and as far as we know, the incident happened exactly as described by Booker. But, given the dubious existence of T-Bone, we’d like to see documents backing up Booker’s statements. Certainly, the public has a right to know if Booker has made a habit of embellishing or fabricating similarly cinematic stories.

In other words, NRO is questioning the veracity of Booker’s story -- in part because, well, they’ve been “stonewalled” each and every time they’ve tried to obtain records corroborating Mr. Miller’s existence. By his own admission, too, Booker has reportedly lied about these sorts of things in the past, presumably to boost his own electoral prospects. So it’s not as if these requests are completely unreasonable. The man is running for a U.S. Senate seat, after all. Which is why the NRO editors are obviously fed up:

Enough is enough. Yesterday we filed suit against the Newark Police Department, the City of Newark, and Mayor Booker to obtain the records in keeping with New Jersey law. This suit shouldn’t be necessary, but the official obstruction in Newark has made it so. In such an instance, everyone should favor openness.

This must be causing all sorts of political headaches for Cory Booker. So perhaps he should have just come clean or released the documents when he had the chance.