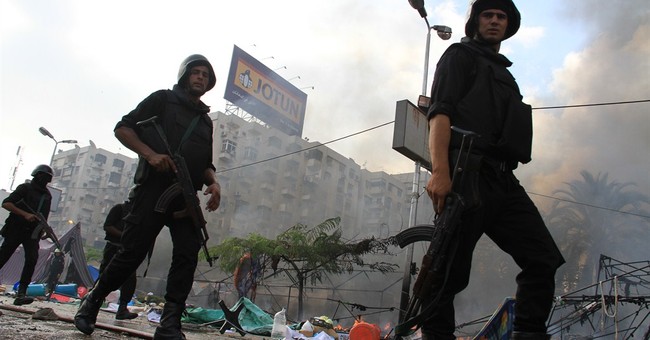 Two journalists have reportedly been killed after violence erupted in Cairo Wednesday morning at a pro-Muslim Brotherhood encampment where Egyptian activists were protesting the ousting of former President Mohamed Morsi for weeks. There are also conflicting reports about how many total people have been killed. Some news agencies are reporting 56; others as many as 124 (via the Telegraph):

Mick Deane, 61, was shot during the raid on activists camped in Rabaa al-Adawiya Square in Cairo, where thousands of supporters of Mr Morsi’s Muslim Brotherhood had staged a six-week sit-in.

No other members of the Sky News team covering the violence in Egypt were hurt.

Mr Deane, who was married with two sons, had worked for the channel for 15 years, based in Washington DC and Jerusalem.

I am saddened to hear of the death of cameraman Mick Deane, covering Egyptian violence. My thoughts are with his family and @SkyNews team.

And the second victim was only 26-years-old:

Family members said she was shot at the Rabaa Al Adawiya Square in Cairo. Scores were reported dead as troops stormed the pro-Mursi camps.

Habiba was not on any official assignment and had gone to her home country on annual leave.

She joined Gulf News on September 11, 2011, interning as a community journalist for the Readers Desk.

UPDATE: ABC News is reporting that the interim Egyptian president will impose a "state of emergency" beginning at 4:00 PM local time today.

So, that call for Mubarak to step down… not so swift in retrospect, huh?

UPDATE: Impossible to know for sure but it seems as though 95 people were killed (via USA Today):

Nearly 100 people were killed in clashes across the country that erupted Wednesday when Egyptian security forces cleared out thousands of people at sit-ins demanding the return of ousted president Mohammed Morsi.

The Egyptian Health Ministry says 95 people died and hundreds were injured in the clashes. Egypt's interim president has declared a monthlong state of emergency.

UPDATE: The White House weighs in:

UPDATE: Apparently the curfew will last for months:

#Egypt: Interim government claims 95 have died, but the Muslim Brotherhood puts the death toll as high as 2,000. http://t.co/Dj7e8i04Dz

I'd be very surprised if that was the case.

UPDATE: Some of these pictures are absolutely brutal. (*CONTENT WARNING*)

UPDATE: A not insignificant development: