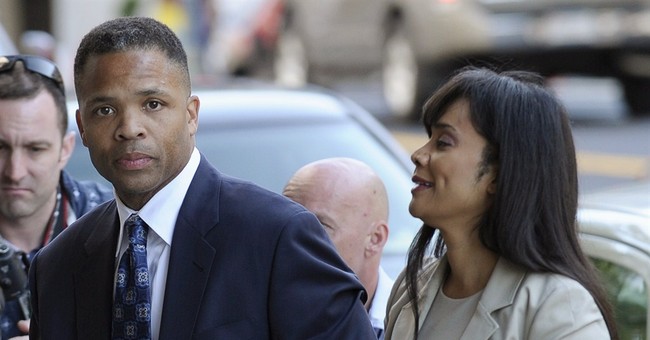 Add former Rep. Jesse Jackson Jr. to the growing list of Illinois Democrats who will spend time behind bars. The Chicago Sun-Times reports:

WASHINGTON — Former U.S. Rep. Jesse Jackson Jr. was sentenced to 2½ years in prison Wednesday after pleading guilty to stealing more than $750,000 from his campaign fund and illegally using the money for personal purchases. “I was wrong and I don’t fault anyone,” he said.

“There may be blurred lines for congressmen to follow when their lives are political. This case did not come near those areas,” said U.S. District Judge Amy Berman Jackson (no relation), saying that she must use Jackson Jr. as an example to maintain confidence in the system.

The former congressman, addressing the court, stopped several times before the judge, to blow his nose in a tissue. At one point, he tried talking again but whispered “I can’t see” because his crying was fogging up his glasses.

“I didn’t separate my personal life from my political life, and I couldn’t be more wrong,” he said. “I take responsibility for my actions.”

Wait. What exactly did he use the campaign funds for? Oh, right:

Jesse Jackson Jr. pleaded guilty to stealing more than $750,000 from his campaign fund and illegally using the money for personal purchases — from Michael Jackson memorabilia, fur coats and a Rolex watch. His wife pleaded guilty to signing off on tax returns, knowing that the couple had underreported their income.

The arrogance and stupidity of using campaign funds to buy frivolous merchandise is simply breathtaking. But the saddest thing of all might be that he actually won re-election after disappearing for months (he was receiving treatment for bipolar II disorder) while under investigation for campaign fraud. Thankfully, he later resigned.