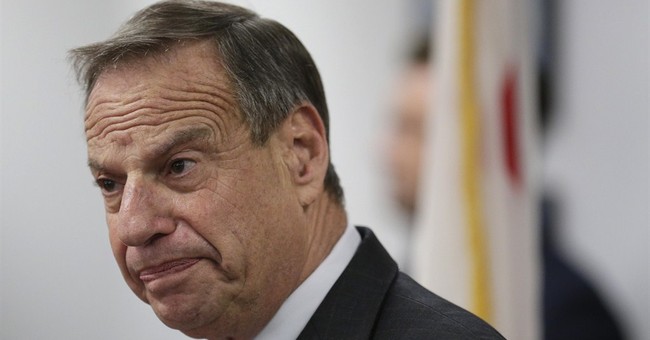 It’s bad enough the Mayor of San Diego won’t resign even though seven women have accused him of sexual misconduct forcing him to publicly apologize. But now he wants the public to pay his legal expenses? Wow.

Last week, Filner's lawyer sent a letter to the city, saying it should mount the mayor's defense and pay his legal bills.

On Tuesday, the city council will hold a closed session to figure out how to proceed.

It's a tricky predicament.

Seven of nine members of the city council have asked Filner to step down.

And even though it's not unprecedented for cities to pick up the tab to defend one of its officials, some city council members have said Filner's case is different: the acts he's accused of didn't take place as part of his official duties.

There's also another hitch: the city itself, along with the mayor, is the defendant in a lawsuit filed by his former spokeswoman -- one of seven women accusing Filner of unwanted groping, kissing or other inappropriate contact.

Don’t worry, guys. Filner is very, very serious about getting help. In fact, he will enter a rehab facility for two weeks to cure himself:

Filner, 70, says he will enter a behavior counseling clinic next month for two weeks of "intensive therapy." But, he has repeatedly said he will not step down from an office he was elected to barely eight months ago.

San Diego's city charter does not require him to appoint an interim mayor for a temporary absence.

His decision is unlikely to quell the mounting calls for his resignation.

Of course, Filner is innocent until proven guilty. But there’s also this:

In response, Filner's chief of staff resigned, the Democratic Party of San Diego voted to call for his resignation -- even his fiancee left his side.

It’s remarkable that when politicians get entangled in scandal they cling to power hoping everything will just work itself out. I don’t expect that to be the case this time. I expect the calls for Filner to resign to grow even louder in the weeks ahead.

The truth, I think, is that the evidence suggests he’s been a serial misogynist for decades, dating back to his time in the U.S. House. At the same time, many prominent Democrats have called for his resignation and publicly condemned his behavior. In short, if he wasn’t so arrogant, he would apologize to the public -- as well as those he hurt -- and retire from public life. Instead, he’s urging the public to pay his legal fees. Go figure.

And we wonder why politicians are held in such low regard by the general public these days?