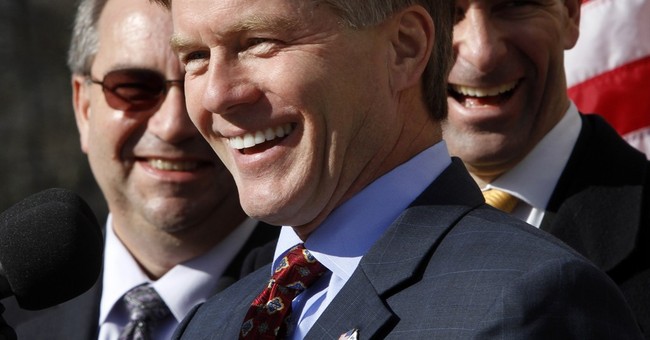 The Roanoke College Poll interviewed 525 registered voters in Virginia between July 8 and July 14 and has a margin of error of +4.3 percent.

PPP’s most recent poll of Virginia voters shows a tight race for the governorship brewing in November. Democratic nominee and former chairman of the Democratic Party Terry McAuliffe leads Republican Attorney General Ken Cuccinelli 41% to 37%, with Libertarian nominee Robert Sarvis receiving 7% of the vote. Cuccinelli is viewed in a mostly negative light by the state, as 32% of the state has a favorable opinion but 47% has an unfavorableopinion, including 57% of independents. McAuliffe is less well known, as only 70% of Virginians have an opinion on him, and are rather evenly divided, 34% saying they had a favorable opinion versus 36% with an unfavorable view. In fact, more Democrats have an opinion on Cuccinelli than they do about their own nominee.

Of course, none of these numbers actually matter four months out from an election -- especially when so many voters have yet to make up their minds:

Theme from PPP and Roanoke polls out this week: LOTS of undecided/disengaged voters. #VAGov

What's most fascinating about Quinnipiac’s recent findings is not that Terry McAuliffe maintains a razor thin lead over his Republican opponent, but that embattled Governor Bob McDonnell is actually weathering his scandals. Though a different poll shows most Virginians haven’t been following the allegations closely (a family friend reportedly showered his family with all sorts of financial gifts), his approval ratings are still respectable at 46 percent. Meanwhile, many Republican insiders fear that the allegations could affect Cuccinelli’s chances of winning the governor’s seat next fall, a point not lost on PPP’s pollsters:

“Our polling in Virginia this year has consistently found Terry McAuliffe with a 4 or 5 point lead,” said Dean Debnam, President of Public Policy Polling. “Ken Cuccinelli isn’t a very popular candidate and Bob McDonnell’s woes aren’t doing much to help the Republican brand in the state.”

At the same time, Terry McAuliffe is a fundraiser by training and will almost certainly bring in more than enough money to win the election, his personal failings notwithstanding:

All of Democratic gubernatorial candidate Terry McAuliffe’s top 18 donors over the first five months of 2013 are out of state, according to data from the nonprofit Virginia Public Access Project.

The most generous donors’ zip codes are all over — Washington, D.C., Beverly Hills, Chicago, and Chappaqua, N.Y., are just a few.

It isn’t until donor number 19, the Liberian International Ship & Corporate Registry with $60,000 in 2013 donations, that a familiar locality appears — Vienna, Va.

Those figures don’t include donations for June, which have yet to be incorporated into VPAP’s data.

Considering there is only one other gubernatorial election this year, all eyes will be on Virginia in November. Will Republicans be able to keep an increasingly purple state in the hands of Republicans (despite less-than-fortuitous circumstances) or will Democrats take advantage of the political headwinds and govern the Old Dominion for the next four years? We’ll see.