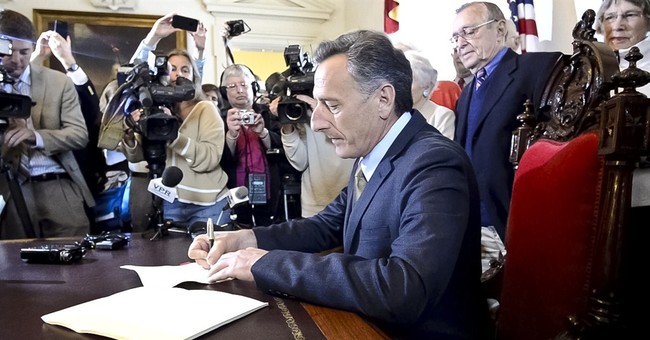 Here’s a significant and little-known news item from yesterday that unsurprisingly flew under the radar: Vermont became the third U.S. state -- and the first via the legislative process -- to legalize physician-assisted suicide. Life News has the details:

With Governor Peter Shumlin’s signature on a bill the state legislature approved, Vermont [yesterday] becomes the third state after Oregon and Washington to legalize assisted suicide.

As it should. Catherine Glenn Foster, litigation counsel with Alliance Defending Freedom and a Townhall columnist, explained some of the problems with the bill mere hours before the initiative passed the state legislature:

In other words, it’s not uncommon for “terminal” patients to feel persuaded -- or perhaps even coerced -- into taking life-ending drugs. Why? Because they’ve determined that their own lives have become, well, a source of financial distress and/or inconvenience to those whom are closest to them. How sad. It’s no surprise, then, that the American Medical Association is staunchly opposed to such practices, which obviously undermine the sanctity and dignity of human life. Back to the Life News article:

And yet now this newly passed “health care” law is perhaps on Vermont’s statute books forever. Splendid. Of course, partisans on both sides of the aisle can debate the merits of physician-assisted suicide, and whether or not it is morally defensible (which I don’t believe it is), but there is absolutely no denying the fact that this loosely-worded law is in many respects deeply flawed. And, as a result, I suspect it will have devastating consequences -- not only for patients themselves who ingest these lethal and toxic substances, but for their families and loved ones as well.