Reid: “We’re Not Going to Bow to Tea Party Anarchists" 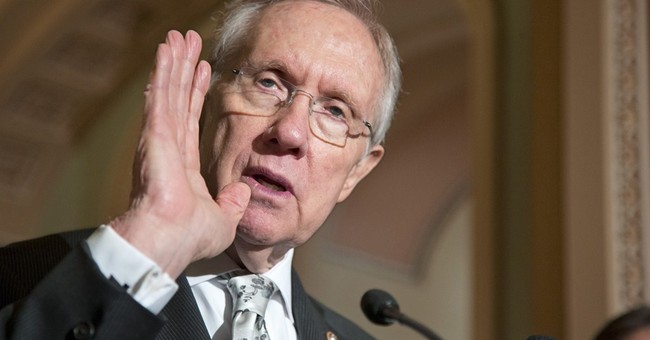 On the Senate Floor today, Senate Majority Leader Harry Reid made it patently clear to everyone that the so-called “anarchists” comprising the Republican Party aren’t going to get their way -- no matter how hard they try (via Politico):

It’s going to be a long week.

A pivotal period for the Senate got off to a nasty start on Monday, with Majority Leader Harry Reid ripping conservatives as “anarchists” and “fanatics” and Republican Ted Cruz initially blocking the Nevada Democrat from moving to consideration of noncontroversial nominees.

The exchange underscores the bad blood between Cruz and Reid and the high stakes countdown to an Oct. 1 government shutdown: Both want to keep the government open but the Texas freshman only wants to do so if the continuing resolution is preserved as passed by the House and does not fund Obamacare, while Reid seeks to keep President Barack Obama’s signature health care law fully funded. Anything less is “dead” in the Senate, Reid said.

“We’re not going to bow to tea party anarchists who deny the mere fact that Obamacare is the law. We will not bow to tea party anarchists who refuse to accept that the Supreme Court ruled that Obamacare is constitutional,” Reid said in a blistering opening speech. “The simple fact remains: Obamacare is the law of the land and will remain the law of the land as long as Barack Obama is president of the United States and as long as I’m Senate majority leader.”

Establishment Republicans might not like Cruz’s “style” and Democrats might not care for his politics, but accusing the Texas Senator of being an anarchist? C'mon. For what it’s worth, Cruz & Co. do in fact support funding all government services via the Continuing Resolution -- except, of course, the president’s health care law. So tell me: How does that constitute anarchy again?

Obamacare, meanwhile, may be “the law of the land” as Reid forcefully assures us, but its implementation hardly seems constitutional. Why are certain groups of people (read: members of Congress and their staffs) given exemptions from the law and American families are not? This clearly violates the very language of the legislation itself. Additionally, why is the president of the United States allowed to unilaterally pick and choose which provisions of the law are delayed and which ones aren’t? These are just two examples. I for one was under the impression that if a president wanted to amend or change legislation already passed by the federal Congress and signed into law, he needed Congressional approval to do so. Is that not the case anymore? Yes, the Affordable Care Act is President Obama’s crowning domestic achievement, but does that give him the right, indeed the authority, to change deadlines as he sees fit? No.

Congressional Republicans have grave concerns about implementing Obamacare. And Reid may hate the fact that some Republican Senators are leading a grassroots movement to defund it. But perhaps if he took a closer look at the legislation itself, he’d at least have a better understanding for why Tea Party Republicans in the upper chamber are resorting to such, shall we say, unconventional tactics.