UKIP Leader to Greek PM: "Get Back Control of Your Country" 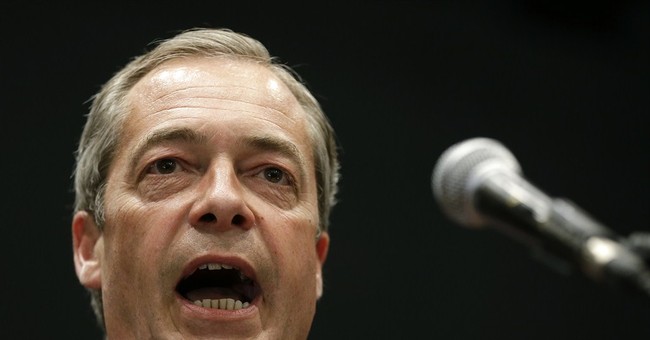 UKIP Leader Nigel Farage gave a rousing speech on the floor of European Parliament yesterday, in which he urged the Greek Prime Minister to leave the euro and lead his country into more prosperous days. Farage said the European project is now "beginning to die," and he cited an "irreconcilable cultural difference" between northern and southern Europe as being the fundamental obstacle to a well-functioning EU.

Farage called the euro a "new Berlin Wall" that divides northern and southern Europe. Standing across the room from Prime Minister Tsipras, he frankly told him that "your moment has come," and that "if you've got the courage, you should lead the Greek people out of the Eurozone with your head held high." He stressed that the European banks can no longer afford to hand Greece bailouts, and that Greece has no realistic future inside the Eurozone.

Farage has been a longtime critic of the EU, and that criticism is reflected in the name of his political party: the "UK Independence Party." UKIP views the EU as having unjustly usurped the national identities of European countries and their rights of self-government. The EU has, in fact, taken on many of the legislative and executive functions traditionally left to the nation-state, and it has done so without receiving democratic consent from the participating nations. In his speech, Farage criticized this lapse in democratic governance as well as the naive optimism that led to the EU:

Those of us, of course, that criticized this were told that we were extremists and we lacked vision. Well, one vision we didn't lack is we understood that the countries of Europe are different, and that if you try and force together different people, or different economies — without first seeking the consent of those people — it is unlikely to work. And the plan has failed."

EU leaders have given Greece until Thursday midnight to submit a proposal for credible economic reforms. Greek leaders are now scrambling to put together a proposal, which EU leaders will review on Saturday. They will make a final decision on Sunday as to whether they will extend Greece a fresh bailout.