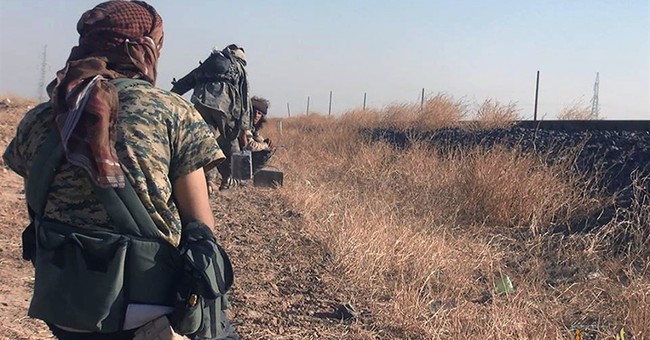 The United States has been blocking Arab nations from giving heavy weapons to the Kurdish army in its effort to fight ISIS, according to a new report. Kurdish Peshmerga forces have been fighting ISIS for months and have recently made key gains, but they have repeatedly voiced their need for heavier armaments. They are currently relying on outdated Soviet-era weaponry, while their ISIS opponents are wielding modern American arms, which they seized from Iraqi troops last year.

The US-led air coalition has providing bombing assistance to Kurdish troops, which proved key to the Kurdish advance into Syria two weeks ago. But calls to give heavy armaments, even from within the US Congress, have gone unanswered. A measure to directly arm the Kurds failed in the Senate two weeks ago.

Some Arab countries have expressed unwillingness to wait on US support.

“If the Americans and the West are not prepared to do anything serious about defeating Isil, then we will have to find new ways of dealing with the threat,” said a senior Arab government official. “With Isil making ground all the time we simply cannot afford to wait for Washington to wake up to the enormity of the threat we face.”

European countries have even purchased weapons for the Kurds — millions of dollars' worth — yet those weapons haven't yet reached Kurdish hands. The US military formally oversees the war against ISIS, and it directs all military arms support through Baghdad. This has enabled the US to block all arms transfers to the Kurds from other countries.

Regional allies — such as Saudi Arabia, Jordan and the Gulf states — have been frustrated at the lack of direction and resolve in the US-led air campaign. These countries' militaries have frequently identified ISIS targets on the ground, only to have them vetoed by US officials. One senior Gulf state officical said:

“There is simply no strategic approach. “There is a lack of coordination in selecting targets, and there is no overall plan for defeating Isil.”

US pilots have also complained of targets being called off, even as they have them in the crosshairs.

Why would the president and administration officials want to keep Kurdish fighters from obtaining heavy arms?

One likely reason for the administration's blocking of arms is that a well-armed Kurdish army poses a threat to Turkey — a NATO ally that affords the US key strategic privileges. Turkey holds numerous military bases that the US uses. They not only allow the US to hold a key presence in the region; they also give the US a strategic foothold at Russia's doorstep.

The Kurdish people — who have no official nation, yet desire independence — have long posed a threat to Turkey's national stability. Ethnic Kurds comprise about 18 percent of Turkey's population and are mostly concentrated in the country's southeastern provinces, which border Syria and Iraq. If the Kurdish Peshmerga were to attain heavy arms, it may well defeat ISIS, but it would also embolden the Kurds to consolidate their ethnic communities in Turkey and forcefully push for national independence. If that happened, Turkey would lose 18 percent of its population and large swaths of land. Because Turkey is such an asset for the US, the administration is likely aiming to keep Turkey happy by keeping the Kurds relatively weak.

Since the Kurds have made real progress against ISIS, the administration is likely playing a game of wait-and-see in hopes that the progress continues. It is a rather forward move, though, for the administration to block other countries from arming the Kurds. It is reasonable to assume the US could keep good relations with Turkey without going so far as to block other countries' aid to the Kurds.

Even so, one can argue that the Kurds deserve their own nation anyway, and a strong Kurdistan would serve American interests and create a new regional buffer against Iran — a buffer that Turkey is not providing. At the very least, US officials should stop preventing other countries from giving arms to the Kurds. The biggest threat to the region is not an unhappy Turkey, but ISIS and the havoc it is wreaking in Syria and Iraq. A well-armed Kurdish army can only help the overall situation.

Here We Go Again: Yet Another Democratic Politician Makes a Fool of Themselves Over Banned Books
Rebecca Downs
'It's Just Incompetence': There Were Red Flags Everywhere With the Buffalo Shooter
Matt Vespa