Gov. Hutchinson Hits Back at Biden Over 'Neanderthal' Comment 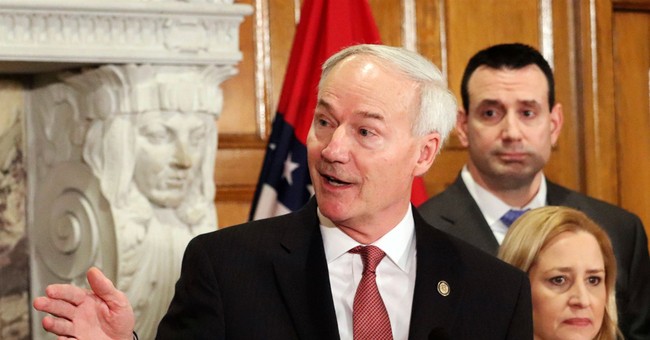 President Biden thinks the governors who rolled back coronavirus mandates are "neanderthals."

That would include Texas Gov. Greg Abbott and Mississippi Gov. Tate Reeves, who made waves last week when they announced their states would be 100 percent open and maskless.

"The last thing we need is neanderthal thinking that in the meantime, everything's fine take off your mask," Biden said at the White House last week. "Forget it."

Arkansas Gov. Asa Hutchinson also apparently falls into that category because last month he changed the guidelines from mandatory to optional, allowing businesses to open. He's relaxing mandates, however, with testing still in place, and vaccine distribution well under way.

"I don't think it's fair to say it's Neanderthal-type thinking," Hutchinson said on "Fox News Sunday."

From the Boston Tea Party, from our founding, he explained, we've been freedom lovers.

"It's pretty natural to have a sensitivity to freedom-loving Americans that say we'll do the right thing," Hutchinson explained. "We know what to do. Just give us our freedom back and lift some of these mandates. That's the nature of America. I understand that's not caveman thinking, that's common sense."

Gov. Reeves defended his decision to abolish the mask mandate, because Mississippians needed to get back to work.

"We have to get our economy rolling so that individuals can get back to work," Mississippi Gov. Tate Reeves defends decision to lift mask mandates. "Unlike Pres. Biden who wants to insult Americans and insult Mississippians, I actually trust Mississippians to make good decisions" pic.twitter.com/nr075ayLVo