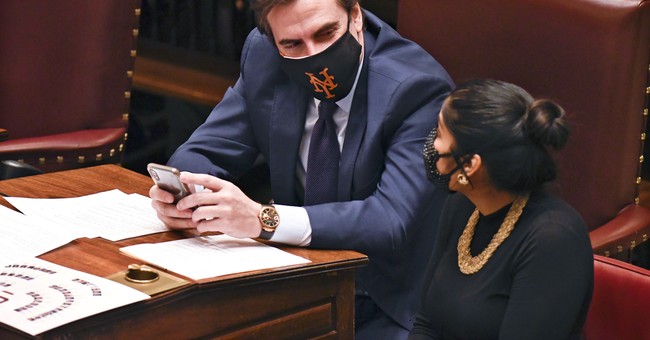 New York lawmakers left and right are losing confidence in Gov. Andrew Cuomo's ability to lead as he fields two separate scandals. The first scandal to his name is the same one we've been covering for months - how his administration withheld the accurate number of COVID-19 nursing home deaths. The second, more recent scandal to unfold is that multiple women have come forward to accuse the governor of sexual harassment. He apologized for the latter controversy at a press conference this week, but no such "sorrys" were uttered for the nursing home victims' families.

With that in mind, the Senate voted 43-20 on Friday to strip Gov. Cuomo of some emergency powers he was granted last March at the start of the pandemic. And legislators are pushing back at the governor's claims he negotiated a deal with them.

"There is so much that this governor has done that I’m bothered by," Senate Deputy Majority Mike Gianaris said, adding, "I haven’t trusted this governor in a long time."

Gianaris and Assembly Speaker Carl Heastie said that the governor lied about being involved in negotiations with them on the measure, according to Bloomberg's reporting.

Republicans, however, say the bill doesn't go far enough to curb Cuomo's powers. According to Republican leader Will Barclay and Senate Republican leader Rob Ortt, what they voted on is a watered down proposal that is "only a fraction of what's necessary."

“Now that we've seen the details of what Democrats proposed, we can more fully appreciated it for the failure it is," Leader Barclay said in a statement. "Make no mistake: This is not what ‘repeal’ looks like. This is not what ending emergency powers looks like. But it IS what a three-way agreement looks like. A year ago today, the governor signed the bill that expanded his authorities. In the past 12 months, we've seen lockdowns, business closures, jobs lost, schools and chaos, a nursing home cover-up, and now criminal investigations and sexual harassment allegations. Somehow, Democrats still can't seem to bring themselves to govern independently of Andrew Cuomo."