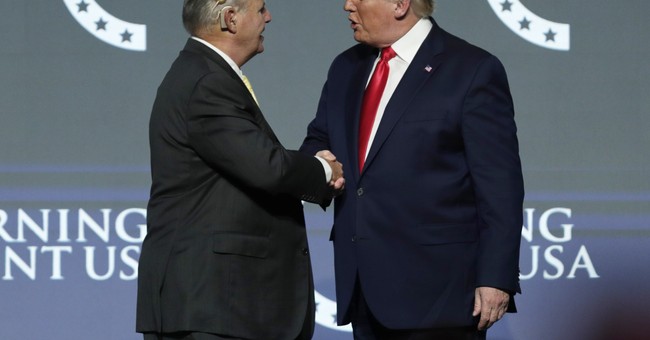 "The great Rush Limbaugh has passed away to a better place, free from physical pain and hostility," Trump said. "His honor, courage, strength, and loyalty will never be replaced. Rush was a patriot, a defender of Liberty, and someone who believed in all of the greatness our Country stands for. Rush was a friend to myself and millions of Americans—a guiding light with the ability to see the truth and paint vivid pictures over the airwaves. Melania and I express our deepest condolences to his wonderful wife, Kathryn, his family, and all of his dedicated fans. He will be missed greatly."

The conservative movement lost one of its heroes on Wednesday as Rush Limbaugh lost his battle with advanced lung cancer. His wife, Kathryn, made the announcement on his radio show. President Trump called in live during Fox News's coverage of the breaking news to reflect on his friendship with the legendary radio host.

Trump explained that the two developed a friendship after Limbaugh told him he liked the "rather controversial" speech he gave in 2015 after coming down the escalator in Trump Tower to announce he'd be running for president.

"He was a unique guy, and he became a friend of mine...he was with me right from the beginning," Trump said of Limbaugh. "He was just a great gentleman. A great man."

And from then on, Limbaugh carried his message. After his win against Hillary Clinton, Trump says he called Limbaugh "just to thank him" and from there they developed "a very good friendship."

"He loved this country," Trump said, later adding that Limbaugh was "irreplaceable" and "a man of the future."

At his last State of the Union speech in February 2020, Trump surprised Limbaugh by awarding him the Presidential Medal of Freedom. First lady Melania Trump, who was sitting next to Limbaugh, placed the medal on him herself. Limbaugh was visibly emotional from the gesture.

Rush Limbaugh had over 20 C-SPAN appearances, including when he received the Presidential Medal of Freedom during the 2020 State of the Union Address. https://t.co/3jvuqdkg3s RIP. pic.twitter.com/JFtgK1cwMz

"It was something special, it was an incredible night," Trump recalled on Wednesday.