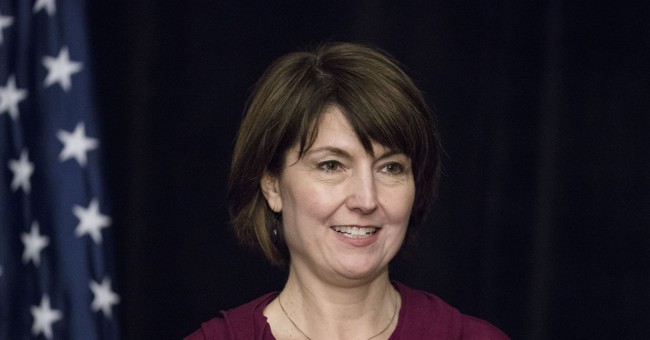 Lawmakers on the House Energy and Commerce committee held a debate on the Hyde Amendment Thursday night. The measure, which was enacted back in 1976, bans the taxpayer funding of abortions.

Rep. Raul Ruiz (D-CA), who like many Democrats supports abolishing the Hyde Amendment, listed a number of conditions that he suggested would justify an abortion. Those include Anencephaly, chromosomal abnormalities, Potter syndrome, problems in pregnancy itself such as amniotic band syndrome, maternal health conditions, and more. All are "indications to end a pregnancy," Ruiz suggests.

"So don't say that ending a pregnancy has no health related...let's speak truth," he said, laughing.

Rep. Cathy McMorris Rodgers (R-WA), whose son Cole was born with Down syndrome, was shocked by what she was hearing.

"I was a little concerned by what I was hearing there," she said after Ruiz finished talking.

"Dr. Ruiz, I just wanted to ask you if you were saying that it was okay to have an abortion if there is a disability?"

She noted that they have a colleague, Rep. Jaime Lynn Herrera Beutler (R-WA), whose daughter was diagnosed with Potter syndrome, one of the conditions Ruiz listed. Not only did Abigail survive, McMorris Rodgers noted, but "she's thriving."

McMorris Rodgers expanded in a statement provided through her office to Townhall:

“The Democrats often tell us to 'follow the science,' yet on the debate over abortion, they have been unwilling to “follow the science,” she said. "It’s amazing today to be able to peak into the mother’s womb — because of technology — and witness the miracle development of a new life, a baby. With research and new therapies, we are now administering health care to babies in the womb before they are born.

“Our son, Cole, born with an extra 21st chromosome, the most common chromosomal abnormality, one which is often on the list of throwaways, is exceeding the expectations. I’ve learned to throw out what the scientific experts told us at his birth because they got it wrong.

“I got a text yesterday from Cole’s teacher. Just to tell me Cole was doing a good job in school, working hard to understand algebra. She also said Cole's is doing a fantastic job building friendships with his peers.

“Think about this. Cole was part of the first generation of those with Down syndrome that learned to read — there was a time when the experts said it wasn’t possible and is doing math.

“Today, he's exceeding expectations and excelling. I can't imagine my life without him.”

At Thursday's hearing, Rodgers made the relevant point that the Hyde protections are largely supported by Americans. Even Slate admitted as much in 2019 after looking at the polling.

In every poll, a plurality of Americans opposes public funding of abortions. In every poll but one, that plurality is a majority. The questions vary, but the result is the same. Respondents support “banning federal funding for abortion” except in rape cases or to save the woman’s life (Politico/Morning Consult, 2019). They believe that “government health insurance programs for low-income women, like Medicaid,” should not “cover abortion” (PRRI, 2018). They oppose “using tax dollars to pay for a woman’s abortion” (Marist, 2019). They oppose allowing “Medicaid funds to be used to pay for abortions” (Politico/Harvard, 2016). When they’re told that “the Hyde Amendment prohibits federal funds from being used to fund abortions, except in the case of incest, rape or to save the life of the mother,” they endorse the amendment (YouGov, 2016). These polls aren’t close. The average gap between the pro-funding and anti-funding positions is 19 percentage points.