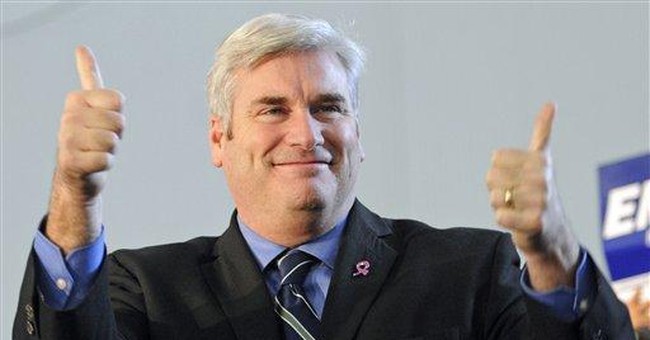 Things got pretty topsy turvy on Capitol Hill on Wednesday. And I mean that literally. During a House Committee on Financial Services meeting, Rep. Tom Emmer (R-MN) tried to call in virtually, but his colleagues were surprised to find that he was upside down. So as Emmer began to rattle off about protecting small businesses during the COVID-19 pandemic, the chairwoman had to interrupt him before they all burst into laughter.

"Will the gentleman suspend?" Rep. Maxine Waters (D-CA) asked the congressman before he could continue. "I'm sorry, Mr. Emmer, are you okay?"

And the scene just got funnier as other lawmakers began to make some entertaining asides, including, "You could stand on your head!," "Is this a metaphor?" and "You're going viral, Tom!"

Any other week Emmer's technical difficulty would probably have been mortifyingly embarrassing, but his mishap just happened to come a day after the most epic Zoom fail in the history of Zoom fails. Poor attorney Rod Ponton will just never live down the day he called into a hearing as a kitten. His filter mistake has now over 32 million views and it got "Cat lawyer" trending for hours.

“I can see that,” responds judge pic.twitter.com/HclKlAUwbM

Thankfully, Ponton re-emerged as a human and Rep. Emmer eventually got turned right side up. So the hearing continued.

"At least you're not a cat!" another lawmaker yelled to Emmer encouragingly.

I am not a cat. pic.twitter.com/d4lhQd0sJ4