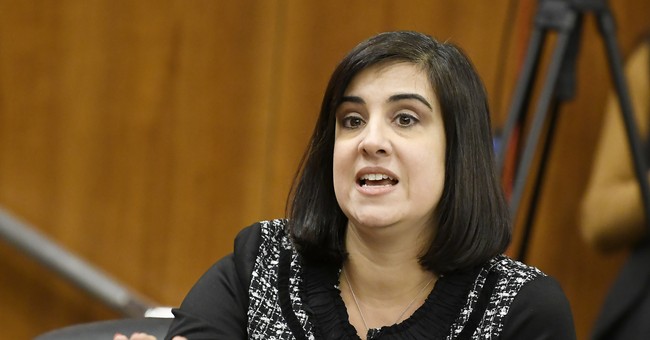 Rep. Nicole Malliotakis (R-NY) was one of just 11 Republicans to vote in favor of the successful resolution to remove the controversial Rep. Marjorie Taylore Greene (R-GA) from her assigned committees, including the House Education and Labor Committee, and the House Budget Committee. The final tally was 230-199.

Colleagues voted to expel her because of past conspiratorial comments Greene has made about the September 11 terror attacks, anti-Semitic remarks, apparent support for violence against Democrats in Congress, and other controversial and inflammatory behavior.

"These were words of the past," Greene insisted on the House floor. "These things do not represent me." She added that "9/11 absolutely happened" and she does "not believe that it's fake."

But while Malliotakis was on board with this ousting, she added an asterisk to her vote. Now that they've done right on their side of the aisle, according to the congresswoman, she argues that it's time for the Democrats to do the same and vote out a couple of their own controversial characters from their respective committees. Namely, Rep. Eric Swalwell (D-CA) for his ties to a suspected Chinese spy, and Rep. Ilhan Omar (D-MN), who's been known to make anti-Semitic comments.

We're holding our breaths for those votes.

Minority Leader Kevin McCarthy (R-CA) joined the rest of the House GOP in agreeing that stripping Greene of her committee titles "will only deepen divisions within this House."

"For all their talk about norms and institutions, it's the Democrats who've acted to undermine the people's house." pic.twitter.com/JPWcyHe9zx