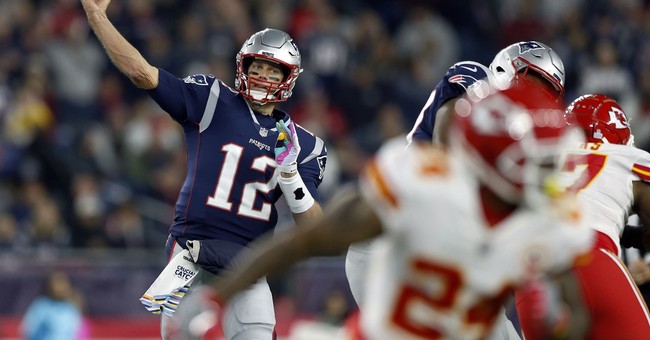 A few days ahead of his return to the Super Bowl, his 10th overall appearance in the championship, Tom Brady received a talking down from USA Today opinion writer Nancy Armour. As she reminds us, half of America flipped when they saw a Make America Great Again hat proudly on display in the quarterback's locker room five years back. As it turned out, Brady was a pal of Donald Trump's and spent quite a few hours together on the golf course. Brady gave Trump a very understated endorsement at the time. And Armour argues that Brady never should have "gotten a pass" on his relationship with Trump.

Tom Brady was happy to talk politics until he wasn’t.

The Make America Great Again hat in his locker, the flippant endorsement of then-presidential candidate Donald Trump. Only when those ties became inconvenient did Brady decide he wanted to “stick to sports,” and that he preferred to be a beacon of positivity rather than delve into society’s thorny ills.

How mighty white of him.

Brady’s ability to enter and exit the debate at his choosing, to shield himself from accountability, is the height of white privilege. As this country grapples with the far reaches of systemic racism, look no further than Brady, for whom the expectations, and allowances granted, will always be different. (USA Today)

Armour observes that Brady has had several chances to denounce Trump, and punted every time.

"Instead, Brady has been allowed to divorce himself from it while Black athletes are made to own their views in perpetuity," she writes.

That presumably includes her recent question for him at a Super Bowl news conference in which he didn't give a straight answer about his friendship with Trump, even following the deadly Capitol riots on January 6.

"I'm not sure how to respond to hypothetical questions like that," he said. "I hope everyone can - were in this position, like I am, again try to be the best I can be everyday as an athlete, as a player, as a person, in my community, for my team and so forth so...I'm not sure what else."

Tom Brady attempts to answer a question from @nrarmour about whether or not he thinks he would have the same room to weigh in on political and/or borderline controversial topics if he were Black. #SuperBowl pic.twitter.com/m8fTxjlrq1

As Armour noted, “Undisputed” co-host Shannon Sharpe, a Hall of Famer, recently argued that if a black athlete like Lebron James had spoken about his friendship with someone like Reverend Louis Farrakhan, America would not have been so forgiving.

How would America react? pic.twitter.com/35uJlmQn4G

"How would America react?" Sharpe asked. "Blacks have always had to be very, very quiet about who our friends are...LeBron James can never say, a prominent black athlete can never say, Minister Farrakhan is just my friend. They’d try to cancel anybody with the just mere mention of Mister Farrakhan’s name. Because we like Tom Brady."

Some social media users told Armour they rejected her narrative because Brady has just as much as anyone else to his opinion.

Isn’t it his right to choose a side? Why does he have to explain or justify his views? He has the right to an opinion And opinions are not wrong.

Half the US supports Trump. The problem is the people that think their opinion is the only one that matters and that everyone should agree with them

The media wants nothing more than for athletes to identify with politics as they have. They want them to chose a side as they have done.

Brady and the Tampa Bay Buccaneers will compete in Super Bowl LV on Sunday against Patrick Mahomes and the Kansas City Chiefs.