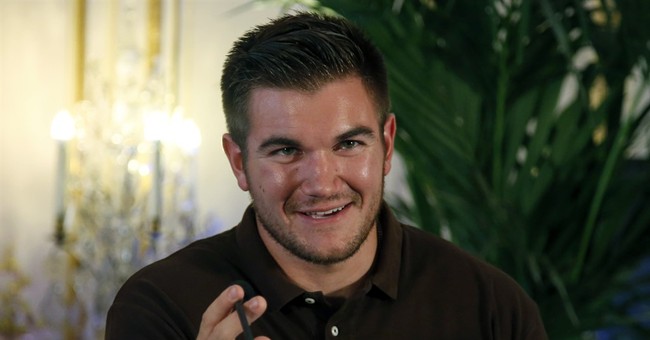 Alek Skarlatos has had a busy six years. He's been a movie star, an aspiring politician, and a finalist on "Dancing with the Stars." But you probably know him better as a hero. Skarlatos and two of his best friends, Anthony Sadler and Spencer Stone, helped to subdue an Islamist militant on the 15:17 train from Amsterdam to Paris in 2015. They were awarded the French Legion of Honor for their actions and were given a proper heroes' welcome on their return to the U.S. As mentioned, his new name ID gave Skarlatos the platform to enter the worlds of Hollywood and politics.

Skarlatos lost his congressional race against Rep. Peter DeFazio in Oregon, but that run opened another door of opportunity. He chatted with Townhall last week about his new role as national director for development at the Freedom Foundation, a conservative think tank whose mission it is to fight back against powerful government unions.

"I learned a lot about the power that unions have over the course of my campaign for Congress last year and so when I got the opportunity to work with Freedom Foundation I jumped on it because I know how much good work can be done to fight against these public sector unions and what they do to their members," Skarlatos told Townhall on Friday.

"It woke me up to what unions do and how much money they give to typically very liberal politicians even though their membership may not be that liberal or they give their money to causes they don't believe in," he added.

Skarlatos called the growth of public sector unions - and in consequence the size of government - a "vicious cycle." The goal of the Freedom Foundation, he explained, is to break that cycle.

"We really need to be all hands on deck over the next two to four years," Skarlatos noted after I mentioned the new leadership in Washington.

Skarlatos will be helping to expand the Freedom Foundation's work nationally. In his home state of Oregon, Skarlatos said they successfully reduced union political spending from $4.1 million to only $1.6 million per cycle. He's hoping they can sprinkle that recipe for success on the rest of the country.

The 2015 Thalys Paris train attack was back in the news in December because the Islamic militant Skarlatos and his buds helped subdue was sentenced to life in prison. In France, that means 30 years, which is the most they can give someone.

"Considering that, I am very happy with it," Skarlatos said. "I think that justice was done, especially considering the other terrorist attacks the cell was involved in, I'm very happy the authorities were able to catch all of them."

He's still close with his fellow heroes, who he's known since childhood.

"What happened on the train really solidified our friendship more than anything else," he noted.

But, that life changing day on the train doesn't come up in normal conversation anymore.

"Not really, to be honest," he said. "It's always going to be a big part of our lives. But it's just kind of something that happened in the grand scheme of our friendship. It's kind of a bump in the road," he said, laughing.