Before It's 'Phased Out,' a Reminder of the Incredible Work Done by Operation Warp Speed 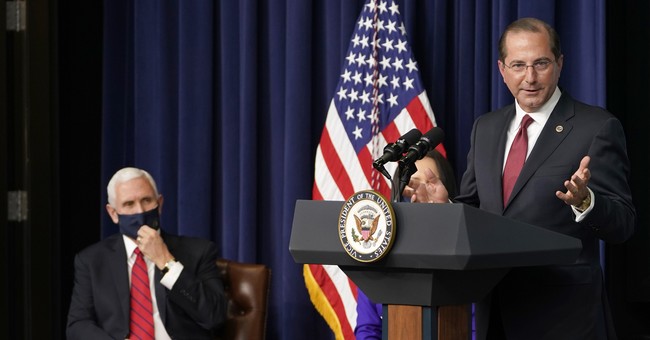 With President-elect Biden's incoming White House press secretary Jen Psaki announcing that they plan to phase out Operation Warp Speed, it's a good time to look back at some of the incredible work done by the public-private partnership.

HHS Secretary Alex Azar delivered his State of the Department Address on Tuesday to recap just some of the agency's accomplishments this past year in helping to stop the spread of COVID-19. He went into detail about the work done by Operation Warp Speed, which was introduced by President Trump in May. Most importantly, how the campaign helped to steer the record setting development of the pair of coronavirus vaccines from Pfizer-BioNTech and Moderna, which have now been administered to over 14 million Americans.

"We drove early development in manufacturing by making pre-purchased commitments of more than $10 billion," Azar said in his address. "We provided comprehensive support for vaccine manufacturing operations, enlisting private sector advisers and logistics experts from the Department of Defense to ensure that production could scale up without a hitch."

The secretary added that the agency worked to ensure that no American would face out-of-pocket cost for vaccination.

The agency did some serious work on therapeutics as well, resulting in the production of two monoclonal antibody therapies. More than 530,000 courses of these treatments have been delivered to the states.

Now a word on diagnostic development. Through a testing working group, the HHS helped send crucial supplies, such as nasal swabs, to health care workers across the country. Starting in March, via a community based testing site model, the agency used regulatory flexibility to set up drive thru testing locations across the country. Over 7,600 sites grew out of that model and more than two-thirds of those sites were located in socially vulnerable areas. Federal purchases and allocations of hundreds of millions of rapid tests have helped nursing homes, schools and other crucial infrastructure track the virus. With the help of the Biomedical Advanced Research and Development Authority, Azar says that 79 million test kits have been shipped across the country. Clocking in another first, the agency oversaw the distribution of the first at-home COVID test that can be used without a prescription. The Pixel test can now be ordered directly from LabCorp for $119 out-of-pocket. (I can personally attest that it ships quickly.)

Azar didn't end his remarks without making a few more notes about the vaccines. It was the success of Operation Warp Speed and the mRNA technology used by the Moderna and Pfizer-BioNTech vaccines, he noted, that was pioneered by the NIH. Success, he said, which "should help reinvigorate our optimism about the frontiers of medical science and what we can do when we bring together the public and private sectors to tackle the toughest challenges."

But as of late critics are focused on the distribution process that has not yet reached HHS's initial goals. The Biden administration, Jen Psaki tweeted, is "phasing in a new structure" to address the "urgent need to address failures of the Trump team approach to vaccine distribution." Media outlets are also beginning to dismiss the work of OWS, and painting Biden to be some sort of savior who will clean up the Trump administration's mess.

That doesn't change the fact that millions of doses have been administered to Americans, with about 1 million more shots going into arms every day.

This statement from Azar at the end of December does a similarly fair job of summarizing this area of the agency's effort:

“Operation Warp Speed delivered by the end of 2020 two FDA-authorized antibody treatments, two FDA-authorized vaccines, five vaccine candidates in Phase 3 clinical trials, and 20 million first doses of vaccine allocated, with the second doses on hand ready to be shipped a few weeks later. This is unprecedented and historic. I am grateful to everyone who has worked tirelessly on this effort this year to save lives.”