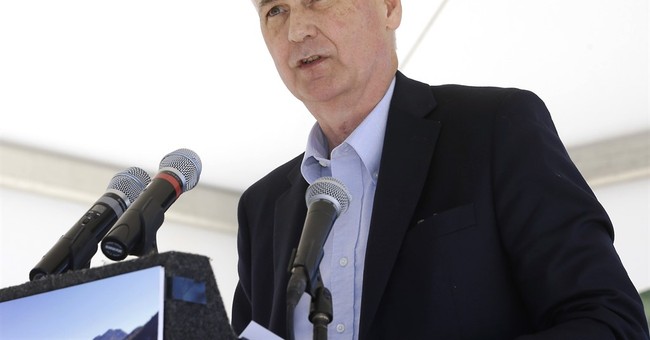 Everyone is fed up with officials like Gov. Gavin Newsom and their restrictive COVID policies. Not just because their edicts are restrictive - but because they've broken them themselves. Much has been typed about Gov. Newsom's fancy birthday dinner for a friend at the French Laundry restaurant earlier this month. The large party appeared to be indoors and he was not wearing a mask. He later apologized and said he should have left the party and gone back to his car.

Rep. Tom McClintock (R-CA) surprised some of his colleagues by rising on the House floor to announce he was defending the governor. They quickly learned why.

"I rise this morning in defense for Governor Gavin Newsom who recently defied his own idiotic COVID edicts as he partied at one of the few restaurants that's not yet been forced out of business," McClintock began. "I defend him, because he was what we once all did in a free society. Make our own decisions over what risks we're willing to run and what precautions we're willing to take according to our own circumstances to protect our own health."

Perhaps, McClintock mused, Newsom has just offered us "deliverance from his own follly."

.@RepMcClintock: "I rise this morning in defense for Governor Gavin Newsom who recently defied his own idiotic COVID edicts as he partied at one of the few restaurants that's not yet been forced out of business." pic.twitter.com/gjaTT0Zk7T

McClintock ran through some numbers. If you're under 49, your chance of surviving is 99.92 percent. If you're over 70, it's over a 90 percent survival rate. Forty percent of those who contract it don't even know they have it. In other words, as he put it, "this isn't the bubonic plague."

"And yet we've allowed our officials to ruin our quality of life over it, destroying countless businesses, throwing tens of millions into unemployment, robbing our children of their educations, and shredding our most cherished rights as Americans," he continued.

McClintock noted that those policies don't exactly agree with the science either. Science tells us, for instance, that obesity leads to severe symptoms, so "the lockdown leftists closed the gyms and kept the liquor stores open."

"Only a fool would claim the omniscience to make an informed judgment for every person in every circumstance in every community. But sadly this crisis has revealed that fools abound in public office. And that a fool in power can quickly become a petty tyrant."

"Gov. Newsom's night of partying should be a wakeup call for every American," the representative warned.

Watch the entire speech to hear McClintock give an entertaining analysis of Newsom's indoor dining mandates.

Gov. Newsom is reportedly quarantining at the moment after having been potentially exposed to COVID.