'On the Road to Recovery': Take a Look at the October Jobs Report 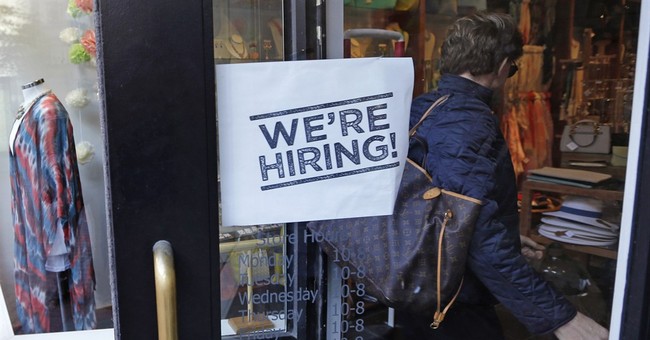 President Trump appears to have followed through on his pledge to kick our economy back into gear. The coronavirus pandemic stopped our progress in its tracks for months. But we slowly reopened the country and got people back to work. In October, we exceeded expectations from the Labor Bureau, adding 638,000 more jobs and slashing the unemployment rate to 6.9 percent.

As CNBC explains, economists were forecasting a payroll gain of 530,000 and an unemployment rate of 7.7 percent. To quote the House GOP, we "crushed" those predictions.

Our economy is on the road to recovery. https://t.co/IBxawWOg4l

The industries hardest hit by the virus appeared to have the strongest comeback. Leisure and hospitality gained 271,000 jobs.

“The strength of this report is really amazing in the face of rising coronavirus cases,” Michael Arone, chief investment strategist at State Street Global Advisors, reacted. “You would have expected that to start to show up in the data, particularly in places like leisure and hospitality, where the numbers are incredibly strong.”

While pumped by the new numbers, Sen. Mike Lee (R-UT), Chairman of the Joint Economic Committee, warned that the progress they've made will mean little if states begin to close again due to a new spike in coronavirus cases.

"In the face of rising infection rates, however, states have recently begun reversing or halting their reopening plans, threatening the economic progress we have witnessed in recent months," Sen. Lee said in a statement. "Therefore, it is important that we stay committed to proven safety precautions, ensuring that American businesses can operate safely and our recovery is as strong as possible."

There's another potentially threatening factor here as well. As you read this morning, Decision Desk has called the state of Pennsylvania and thus the presidency for Joe Biden. If true, will the economic resurgence under President Trump's leadership be for naught?

The Job Creators Network explained their concerns about a Biden presidency.

“In October, the unemployment rate fell to 6.9 percent and 638,000 Americans regained their jobs," JCN President and CEO Alfredo Ortiz said. "In the last six months, about 11.9 million Americans have regained their jobs. We are continuing to move in the right direction, thanks to President Trump’s pro-growth policies and commitment to safely reopening society. However, all that progress is jeopardized by the prospect of a Biden presidency. President Trump still has a path to victory, and the media should not prematurely call the election for Biden when votes are still being counted in Pennsylvania, Arizona, Nevada, and other states. Our prosperity is truly at stake, and our small business members want to make sure this election is conducted fairly. We also need Congress to do their part and pass another stimulus bill with a renewal of the Paycheck Protection Program. Leader McConnell said he wants another stimulus bill passed and signed into law by the end of the year.  We fully support Leader McConnell’s goal. Speaker Pelosi, Chuck Schumer, and the Democrats in Congress have been holding a stimulus bill hostage for months. If their goal was to maximize pain before the election, then they no longer have that excuse. Our message to the Democrats in Congress: Let’s get it done!”