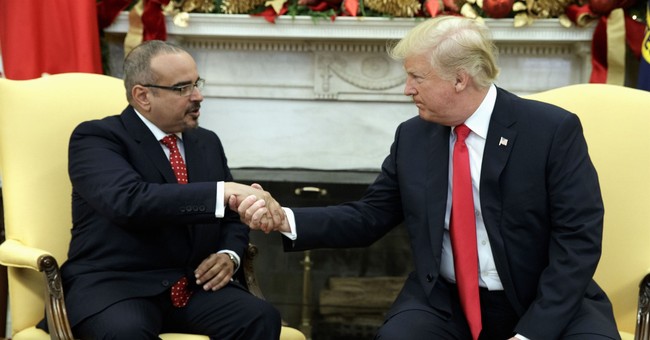 "It's unthinkable this could happen, and so fast," he said from the White House on Friday. He thanked Bahrain and Israel for their "leadership and courage."

BREAKING: @realDonaldTrump announces a HISTORIC deal between Israel and Bahrain, establishing FULL diplomatic relations. This is the 2nd such agreement between Israel & an Arab nation in a MONTH.

Joint Statement of the United States, the Kingdom of Bahrain, and the State of Israel pic.twitter.com/xMquRkGtpM

According to several reports, President Trump is expected to announce on Friday that Bahrain is normalizing ties with Israel. It would come just about a month after the United Arab Emirates officially recognized Israel as a legitimate country in the Middle East.

The president hinted as much during his White House press conference on Thursday.

"Next week at the White House we’ll be having a signing between the UAE and Israel, and we could have another country added into that," Trump said. "And I will tell you that countries are lining up that want to go into it."

Another Muslim Arab state in the Middle East chooses the path of peace, normalization and co-existence with the Jewish state.

Inspiring news in a time, and on a day, when we need as much peace, light and hope as we can get. https://t.co/UNL56B584p

Bahrain is recognising and normalising relations with Israel, just a month after the UAE did.

President Trump was recently nominated for the Nobel Peace Prize thanks in part to his efforts in the Middle East. His name was put forward by Christian Tybring-Gjedde, a member of the Norwegian Parliament.

“For his merit, I think he has done more trying to create peace between nations than most other Peace Prize nominees,” Tybring-Gjedde said. He added that the president has become a leader in helping turn the Middle East "into a region of cooperation and prosperity."