Alek Skarlatos Campaign Ad Hearkens Back to His Train Heroics 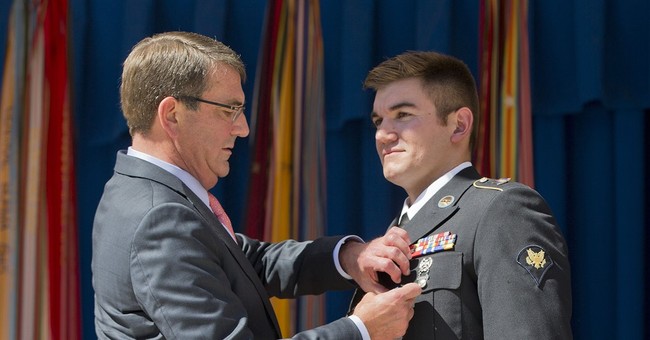 Alek Skarlatos is a hero. He was one of three young men who happened to be on the right train at the right time in Paris in 2015. He and his friends Spencer Stone and Anthony Sadler, who all had military experience, managed to subdue a terrorist who had plotted to shoot and kill passengers, saving countless lives.

Now, Skarlatos wants to bring his fighting spirit to Congress. He's running as a Republican in Oregon's 4th congressional district against Democratic Rep. Peter DeFazio. On Friday the 27-year-old unveiled a new ad and his campaign theme, "Fight for the American Way of Life."

The ad brilliantly depicts Skarlatos sitting on a train that is en route while his narration plays.

"We can feel it," Skarlatos begins. "America is in danger."

5 years ago I fought to stop a terrorist attack on a train in Europe. Today our Country is under attack from within. The Political Elites won’t fight — I will

Help send me to Congress.
America is worth fighting for.

"Socialists and communists are burning our cities," he explains. "Violent mobs are attacking our men and women in uniform. America is under attack."

And the political elite, he says, are doing nothing. Just "watching the country burn."

There are only two options, Skarlatos says, as he balls his fists. Run, or fight.

"I choose to fight. I always have. And I always will. America is worth fighting for. It's time for a fighter. Let's go," Skarlatos says, before racing off toward danger.

Skarlatos's train heroics won him a French Legion of Honor, France’s highest award, as well as a bit of fame. He came in third place on the 21st season of "Dancing with the Stars" and he and his fellow heroes portrayed themselves in Clint Eastwood's movie on the terror attack they prevented, "The 15:17 to Paris," in 2018.

You can learn more about Alek's campaign here.