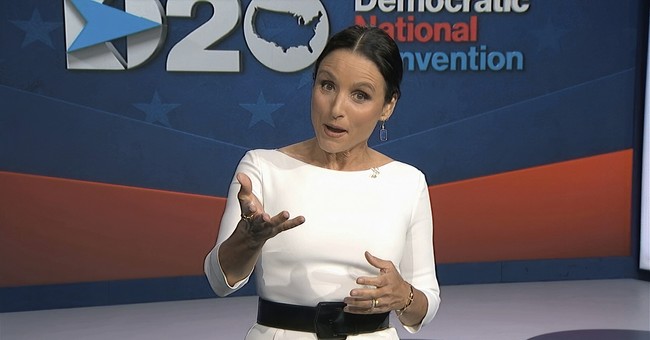 Julia Louis-Dreyfus is a funny lady. How can you not laugh when watching Elaine awkwardly dance on Seinfeld? That's why her flat jokes and terrible timing during Thursday night's Democratic National Convention were pretty surprising. In fact, on more than occasion, her jokes were downright cruel.

We knew from the start her emceeing would be cringeworthy because of this early exchange with former presidential candidate Andrew Yang. This one short, brutal clip will give you an idea.

The Democratic National Convention summed up in 38 seconds. pic.twitter.com/iN5aww9AaY

It got worse. At one point she joked about President Trump's golf game. But it was her insult toward Vice President Mike Pence that took the prize. As she was discussing the Trump administration, she intentionally mispronounced Pence's last name.

"Poonce" appears to be Australian slang for a male homosexual. pic.twitter.com/vkaB8JlWps

For those who don't know (we didn't), "poonce" is slang for a male homosexual in Australia. Considering that Vice President Mike Pence is known for his traditional family values, it's no mystery what Louis-Dreyfus was driving at. There's a second, crass definition of "poonce," which you can read here at Urban Dictionary.

Late night talk show host John Oliver has also made light of Pence's traditional views on gay marriage by publishing a parody of his book about his bunny Marlon Bundo. The original book, penned by Pence's daughter Charlotte, and illustrated by his wife, Second Lady Karen Pence, takes you on a journey through "A Day in the Life of the Vice President." In Oliver's parody, entitled “A Day in the Life of Marlon Bundo," Marlon is a gay bunny who is encouraged by his friends to pursue a relationship with another male bunny, complete with rainbow bow ties.

But right now we all want to know, who wrote these gags for you, Julia?