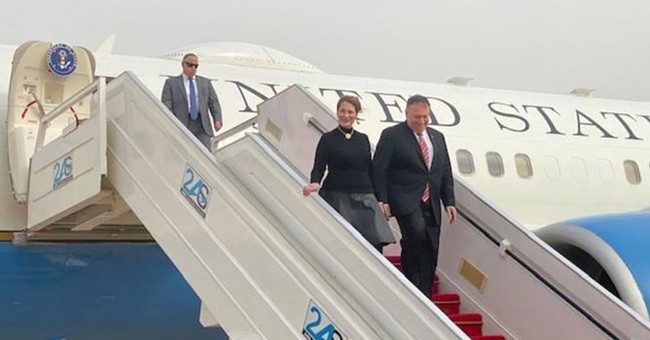 POLITICO is facing some heat for its new profile on Susan Pompeo, wife of Secretary of State Mike Pompeo. In it, they question Mrs. Pompeo's influence in her husband's career, from his time as a House representative, to his tenure at the CIA, and now in his current, most senior role. Her level of involvement in State Department affairs, POLITICO muses, appears to have "no clear precedent, at least not in modern times."

For instance, Mrs. Pompeo is believed to be a main organizer for the high profile Madison Dinners, as well as often working as a "liaison" for her husband. It all raises some serious questions, the editors write.

Some who spoke to POLITICO for this story described Susan Pompeo’s role in benign or positive terms, calling her a stickler for constituent services and rigor, whose attention to details like birthdays and thank-you notes can boost staff morale and forge connections with foreign leaders. But she has also used official and quasi-official resources in ways that have raised questions among congressional Democrats. During Mike Pompeo’s tenure at the CIA, her role had been expansive enough that officials with the spy agency got in touch with the State Department and suggested they prepare a legal memo governing Susan Pompeo’s role before she arrived in Foggy Bottom. (POLITICO)

The outlet used Mrs. Pompeo's involvement to take a swipe at the president too, noting that he too routinely "blurs the line between public and personal interests" by employing his daughter Ivanka and son-in-law Jared Kushner as senior White House aides.

Critics, such as Fox News contributor Rachel Campos-Duffy and the pro-life organization Susan B. Anthony List, were appalled by POLITICO's profile, which they cast off as "outdated" and "sexist."

?.?@politico? has sexist/outdated views of the role of political spouses. Wives shouldn’t travel w/ husbands? Have say in his schedule,or find ways to help him serve country? ?? ?@SecPompeo? loves his wife, honors her intelligence. Bravo! https://t.co/S9FyaOLs7D

HERE WE GO AGAIN: The media is once again attacking @SecPompeo, this time by going after his wife Susan. The only fact established by @Politico’s piece is that Susan cares deeply about her husband and his unwavering dedication to our country. (1/7)

Secretary Pompeo himself responded to POLITICO's sudden interest in his wife, telling them in so many words to back off.

“Susan Pompeo has chosen to serve America in a multitude of ways over the past ten years for the betterment of me, my work teams, Kansas and America,” Pompeo told the outlet. “POLITICO’s continued efforts to smear her are both sad and wrong. Instead of being slandered, she should be applauded and thanked.”

Pompeo isn't the only Trump cabinet member who's found himself having to defend his wife from the media these past few years. Vice President Mike Pence had to step in to defend his wife Karen after she received some backlash for working at a Christian school whose employment applications require candidates to agree that marriage is only between a man and a woman.

“My wife and I have been in the public eye for quite a while. We’re used to the criticism,” Pence reacted at the time. “But I have to tell you, to see major news organizations attacking Christian education, is deeply offensive to us."

Many are wondering...did we see these kinds of hit jobs against the first ladies of the Obama administration?