Secretary Pompeo Explains Why Bolton Should Be Prosecuted 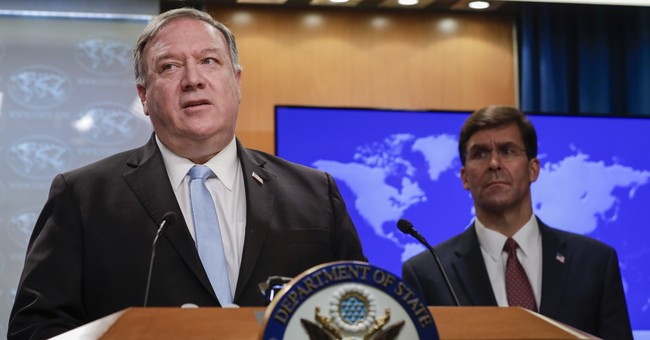 Thanks to excerpts from his upcoming book, "The Room Where it Happened," we learned just how much former national security advisor John Bolton dislikes President Trump. And he's emphasized that sentiment in book interviews, telling ABC's Martha Raddatz last week that he thought Trump was unfit to be president. According to Bolton, he heard President Trump asking China to help him in his re-election efforts, as well as other questionable requests from his international counterparts.

Secretary of State Mike Pompeo said he was "in the room" too during these conversations. And he remembers things very differently.

"First, a number of things I’ve seen," Pompeo told radio host Hugh Hewitt on Tuesday. "I was in the room, too. I was present for those. I remember them very differently. These are things that have been either fully spun or are frankly just lies that don’t reflect what truly happened there."

Secondly, Pompeo explains, he just doesn't trust the guy, and neither should readers.

"Second, you know, the book says he was in the room," the secretary of state continued. "The truth is he was such a difficult person, and leaked so much information even while he was still in office, that it was often the case that he wasn’t a participant in the meetings because we all had come to see that there was real risk that this information would end up in places it shouldn’t have."

He wants to see Bolton prosecuted for publishing a book that reportedly contains classified information and threatened U.S. national security. He's seen individuals at a "much lower level" prosecuted for similar behavior.

"This is unprecedented what John Bolton chose to do while a current president is still in office to have his most senior national security staff member write a book containing detailed asserted quotations about what was said to foreign leaders, what was said in very private meetings on sensitive topics presents enormous risk. I’ve also seen instances where there’s information that I am confident was classified, and I am saddened, because this is a horrible precedent. And I hope, I’ll leave it to Attorney General Barr to make the final decision, but as I stare at that, this is the kind of thing that we’ve seen happen. I was a soldier once, Hugh. You know that story. I saw young soldiers who were prosecuted for releasing classified information at a much lower level who were much more junior and who didn’t have 30 years of experience handling classified information. This is something that has real criminal risk associated with it, and for the life of me, I can’t figure out how it’s the case that this can be permitted to stand without a real response. If this becomes the pattern and practice, this is truly damaging to American national security."

Bolton is short on friends these days in Washington. The Democrats are just as peeved with him, accusing him of avoiding testimony during Trump's impeachment trial so he could save some juicy details for his book.

By the way, Bolton isn't the only one to publish a new book. Sarah Huckabee Sanders shared an intriguing excerpt of her own that paint Bolton as an arrogant man "drunk on power."