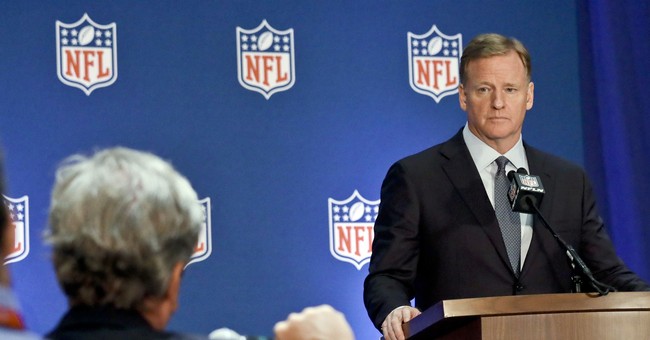 NFL Commissioner Roger Goodell says he and the other leaders in the NFL got the whole kneeling episode wrong. Former San Francisco 49ers quarterback Colin Kaepernick kickstarted the protests when he took a knee during the playing of the national anthem in the summer of 2016. NFL ownership was at a loss. While they didn't want to upset their players who said they were protesting against police brutality, the owners just as well didn't want to tick off their fans, many of whom were booing kneeling players off the field or boycotting the games altogether. So at the time, NFL leadership released a policy that compelled players to acknowledge the anthem. If they morally could not, then they would be forced to remain in the locker room until the anthem concluded.

In the wake of the Minneapolis police killing of George Floyd, which resulted in both peaceful protests and violent riots across the country, NFL stars produced a video for the league, asking what it would take for the owners to finally say, "Black Lives Matter."

It didn't take long. In a statement released on Friday, Goodell said, "we were wrong." His new aim is to "encourage all to speak out and peacefully protest."

Read his full statement below.

“We, the National Football League, believe black lives matter. I personally protest with you and want to be part of the much-needed change in this country. Without black players, there would be no National Football League. And the protests around the country are emblematic of the centuries of silence, inequality and oppression of black players, coaches, fans and staff.” (Yahoo! Sports)

President Trump, who infamously called Kaepernick and other kneeling players "sons of b***hes" as the controversy got underway, maintains that kneeling before the American flag is an unacceptable demonstration.

Could it be even remotely possible that in Roger Goodell’s rather interesting statement of peace and reconciliation, he was intimating that it would now be O.K. for the players to KNEEL, or not to stand, for the National Anthem, thereby disrespecting our Country & our Flag?

The issue has seeped into other professional sports as well. On Tuesday the U.S. Women's National Soccer Team released a statement urging U.S. Soccer to repeal its ban on protesting during the national anthem. U.S. forward Alex Morgan shared the statement on Twitter.