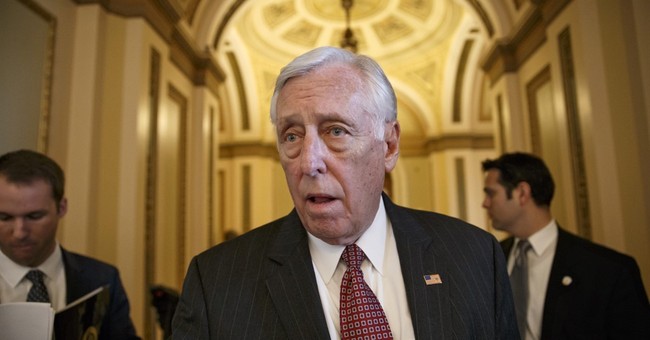 Rep. Steny Hoyer (D-MD) has changed his mind about the House schedule. After speaking with the House physician about the COVID-19 risks, the Democratic Whip decided that the chamber will not return next week.

!!! Hoyer says House will NOT come back on Monday, telling reporters he spoke to the House physician: "We made a judgment that we will not come back next week."

Hoyer's decision was influenced by the number of COVID cases in the D.C. area, which are still climbing. An additional 102 cases and five deaths were reported on Tuesday morning. Per CDC guidelines, the city can't reopen until it experiences two weeks of declining cases.

Earlier this month Hoyer suggested that the House would only return if there was an "emergency." Social media users asked what on earth he would call the current crisis. Americans everywhere are out of work and small businesses are struggling to stay afloat. They need Congress to act to help them protect their livelihoods, especially after days of Democratic delays to get the Payment Protection Program replenished. The PPP is a provision of the CARES Act that provides relief to small businesses. Those loans are forgivable as long as they continue to pay their employees.

can someone please tell me how approaching 40% unemployment isn't an emergency https://t.co/bTZhvMpm5k

"We will not come back next week but we hope to come back very soon to consider the Cares 2 legislation," Hoyer pledged, explaining that leadership will continue to work with the House doctor on safety measures.

The Senate is still expected to be back at work next week. Hoyer said he wasn't concerned about the optics because senators were only returning to confirm judges and executive appointments.

Hoyer on the optics of the House being out while the Senate is in session:
As I understand it, the Senate is coming back to confirm judges and confirm executive appointments

Hoyer even suggested that the House members are working even harder than they would be in Washington.

"I think most members are working harder than if they were at the Capitol....any thought that the members aren't working very hard trying to help their people with coronavirus is simply incorrect," Hoyer says. "The question is, can we get them back safely when needed?"