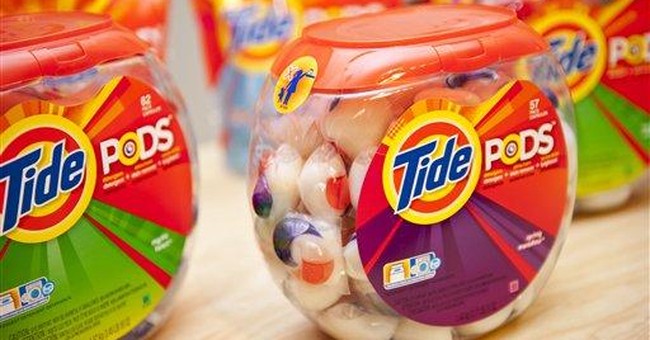 UPDATE: At the White House on Friday, Trump suggested he was being "sarcastic" when he talked about disinfectant to see how the room full of reporters would react.

#BREAKING: President Trump says remarks about heat, light, disinfectant were sarcastic: "I was asking a question sarcastically to reporters like you just to see what would happen." https://t.co/lPysHfFKBb pic.twitter.com/mtY7dZgNnj

At Thursday's coronavirus task force briefing, President Trump shared a few new ideas as to how to treat the coronavirus, among them being heat and UV light, and disinfectant.

"And then I see the disinfectant where it knocks it out in a minute," Trump mused. "One minute. And is there a way we can do something like that, by injection inside or almost a cleaning? Because you see it gets in the lungs and it does a tremendous number on the lungs. So it would be interesting to check that. So, that, you're going to have to use medical doctors with. But it sounds - it sounds interesting to me."

In the hours after the president made those comments, social media blew up with trends like "Tide Pods" and "Windex" to suggest that Trump was telling Americans to chug household cleaners.

The media immediately quoted experts to warn us against it.

Scott Gottlieb, former FDA commissioner under the Trump administration, to @CNBC: "There’s no circumstance under which you should take a disinfectant or inject a disinfectant for the treatment of anything.”

The parent company of Lysol even felt compelled to speak up.

"We must be clear that under no circumstance should our disinfectant products be administered into the human body (through injection, ingestion or any other route)," Reckitt Benckiser told consumers.

But White House officials on Friday suggested that the press took Trump's words out of context.

"President Trump has repeatedly said that Americans should consult with medical doctors regarding coronavirus treatment, a point that he emphasized again during yesterday's briefing," White House press secretary Kayleigh McEnany said. "Leave it to the media to irresponsibly take President Trump out of context and run with negative headlines."