Dr. Birx on Why They Had to Drastically Change the Stay-at-Home Guidelines 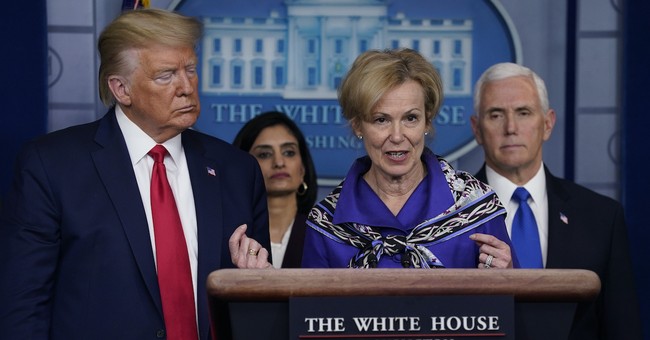 While Wednesday's White House briefing was filled with your typical round of partisan questions about why President Trump is calling it the "Chinese virus," there were a few actually helpful inquiries, and even more helpful answers. One of those exchanges was regarding why the administration had so drastically changed its tone about how much we should be practicing social distancing.

Well, Dr. Birx explained, it's because of the new scientific models they've seen that reveal just how easily the virus could be transmitted, not just between individuals. New studies from the National Institute of Health, for instance, show that the virus can remain on plastic and stainless steel for three days.

The doctor explained she was not as worried about cardboard deliveries because the virus tends to disintegrate over 24 hours on that surface.

Dr. Birx was also careful to note that despite what some carefree millennials think, they certainly can get COVID-19. Some young folks in Italy are currently in critical condition in hospitals because they did not take those precautions. Birx drove this point home because all over the U.S. young people have still been attending large social gatherings. Like in Clearwater, Florida, where some beaches are still at full capacity.

President Trump noted that while these millennials may feel "invincible," they may want to consider how easily they could infect their parents or grandparents. He tweeted out some of the new guidelines.

15 DAYS TO SLOW THE SPREAD! pic.twitter.com/ytgBP3hJv1

Did Fauci Really Say More Kids Have Died of COVID Than the Flu?
Townhall
Peter Doocy grills Jen Psaki about vaccination requirements for people flying vs. walking into US illegally (spin & dodging intensifies)
Twitchy
Here’s What the Police Report Says About Physical Altercation Between Gabrielle Petito and Brian Laundrie
Redstate
You'll Have Only One Question When You See This Hospital's COVID Shot Religious Exemption Form: Is This Thing Legal?
PJ Media