Rep. Gohmert Not Moving on Emergency Relief Bill Until He Sees the 'Substantial Changes' 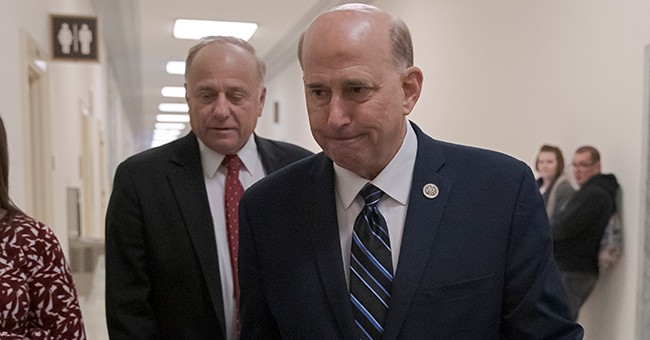 The Families First Coronavirus Response Act, the emergency relief bill intended to help Americans in financial straits during the outbreak, passed the House on Saturday. But it's not ready for the Senate. Republicans like Rep. Louie Gohmert (R-TX) are concerned that they have not had a chance to read the bill in its entirety, and they are doubly concerned by the new "substantial changes" made to the legislation Sunday night. The congressman shared his concerns about the lack of transparency.

We still do not have a final draft of the negotiated changes being called ’technical corrections’ and some of us believe that the newly worded laws should be finished before we pass them. #CoronaVirus

He threatened to block the Senate vote until he can read the new revisions.

"Last night some of the elected members of Congress heard that substantial changes were being made to H.R. 6201, the “Families First Coronavirus Response Act” that the House passed in the wee hours Saturday morning without being afforded the luxury of time to read the final bill before we voted.  I read the 9pm version but was given no time to read or compare the midnight version.

Once again, because the Saturday morning bill was rushed so hysterically to passage, it requires more pages of changes, supposedly about 46 pages of 'technical corrections,' some of which are truly substantive and not just “technical” corrections to a bill that was 110 pages long. The last draft of the 'technical changes' I saw was 87 pages long. The Democrats are writing the so-called 'corrections' as we speak. Having someone here in DC prepared to object forces the Democrat leadership to at least have the law changes drafted before they are approved by a Unanimous Consent vote. I cannot in good conscience give my consent to something that has not been finished or made available to Members of Congress before it is up for a vote.

This coronavirus is doing enough damage to people without Congress compounding the problem to rush through a bill and another corrected bill just to say we did something. We should be attempting to minimize the damage, not piling on. My constituents did not elect the California delegation to represent them, they elected me—and that’s what I am trying to do.

I will not give my consent without first reading these very serious changes that will hopefully minimize bankruptcies caused by the virus rather than causing more. The final draft has still not been finished. I have spoken with Kevin McCarthy and the President who both understand my concerns. Its easy to talk to the President when we completely share the same driving desire to make America even greater."

Rep. Gohmert shared his initial hesitations about the Families First bill on his congressional website on Saturday, including how Democrats were seemingly trying to sprinkle in some social engineering.

"In the wee hours of Saturday morning the U.S. House of Representatives voted on a bill to address economic issues that the Coronavirus may cause," Gohmert wrote. "There is so much we do not know about what this pandemic will do, but I am extremely grateful to our President for his unwavering, steadfast efforts to tackle this pandemic head on. There was a great deal more money in the original bill this week going to things that had nothing to do with our Coronavirus national emergency – including a provision that provided for federally funded abortions."

The other concern shared by some lawmakers is how the legislation will affect businesses who aren't prepared to offer increased paid sick leave.

"With the new requirements for businesses we were not able to adequately consider, will the government pay for people’s sick leave, family leave and vacation time after the business goes bankrupt and has to shut down and can no longer pay anyone for anything?" Gohmert asked. "I am very concerned that yet again, the drafters listened to the biggest businesses and may have helped them drive the little guys out of business."

At a White House press briefing on Monday, President Trump said that if the bill does go back and forth in the House as they address Republican concerns, he suspects they'll only make it "better" and "fairer" for everyone.