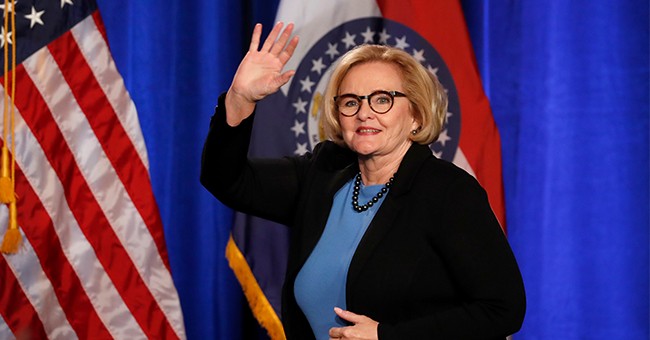 Former Sen. Claire McCaskill (D-MO) is getting plenty of heat for tweeting her awful interpretation about why Housing and Urban Development Secretary Ben Carson was squatting in the aisle of President Trump's plane on Tuesday. According to the Democrat, the Trump campaign was trying to use Carson as their token black surrogate.

One of these things is not like the others. Hint: they made him squat in the aisle so he was visible. pic.twitter.com/aFxrRRjbPi

If McCaskill didn't regret her hot take after the first round of backlash, she sure did after this response from Donald Trump Jr.

1. Dr. Ben Carson did not have a seat in this pic because he was sitting in First Class with my family

2. Dr. Carson is not a "thing," he is a world renowned, life-saving neurosurgeon

A burn to end all burns.

Our own Julio Rosas had a pretty epic response too.

It's more diverse than the Democratic debate stage.

If McCaskill really wanted to pinpoint an actual example of racism, she should have directed her ire toward the Pete Buttigieg campaign. One of the presidential candidate's young African-American supporters tweeted about how his campaign kept asking her to move away from her friends and toward the cameras at his victory rally in Iowa last night so they could feature his black supporters. Buttigieg's struggles with the minority community is no secret, so it appears that his campaign had an agenda.