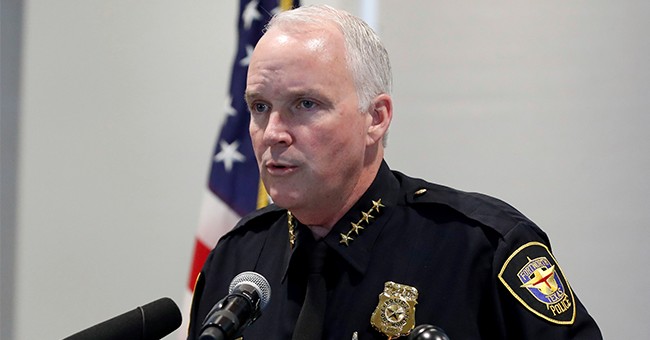 A Fort Worth, Texas police officer killed 28-year-old Atatiana Jefferson in her own home over the weekend. He had gone to the house following a non-emergency call from one of her neighbors. Upon arrival, he perceived the situation to be a threat, and shot Jefferson through the window. The officer, Aaron Dean, was immediately arrested and charged with murder. He has since been released on bond and quit the force.

This was the 9th officer involved shooting in Texas in the past year, seven of which were fatal.

At a press conference on Tuesday, Police Chief Ed Kraus tried to wrap his head around the tragedy. He was visibly upset and struggled to get through his remarks.

#UPDATE on the arrest of Aaron Dean: pic.twitter.com/owb3IiozOl

"The officers are hurting," he said. "It’s very emotional."

He added that there have been a lot of hugs. There are so many officers who "try hard every hard to make this city better." The department had been "trying to build" relationships within the community, he said, before someone came and "washed it away."

Yet, several people have commended the Fort Worth police department are acting so quickly and arresting Dean, knowing right away it was an unjustified shooting.

The chief noted, however, that it will be awhile before and if Dean is prosecuted.

Jefferson's family noted at a recent press conference that they want an independent investigation into the incident. Their attorney, Lee Merritt, offered a condemnation of the Fort Worth Police Department.

“I want to go ahead and dispel the myth that this is somehow a one-off — that this was just a bad-luck incident from an otherwise sound department," he said. “The Fort Worth Police Department is on pace to be one of the deadliest police departments in the United States.”

Just a few weeks ago Dallas police Officer Amber Guyger learned her fate after shooting a man named Botham Jean in his apartment last year. In her testimony Guyger said she had mistaken Jean's apartment for her own and assumed he was a burglar. She was convicted of murder and sentenced to ten years in prison. After the verdict, we got this powerful scene in the courtroom between Guyger and Botham's brother Brandt.