Jane Fonda Among Those Arrested at DC Climate Protest 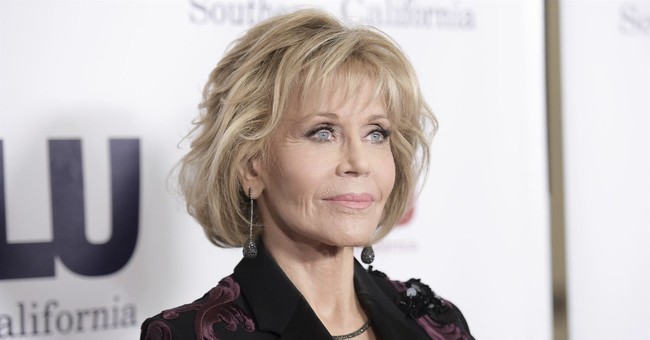 Sixteen people were arrested in Washington, D.C. on Friday during a climate change protest. One of them you may know, actress Jane Fonda.

Jane Fonda was among 16 persons USCP arrested today during climate change protest on Capitol steps. Fonda says she will demonstrate at the Capitol against climate change every Friday between now and January. USCP charged those arrested with “crowding, obstructing or incommoding.”

Apparently she has similar plans for next Friday, and the Friday after that. She shared her schedule with The Washington Post in a recent feature.

But this week, Fonda takes on the role of climate activist and brings it to a new stage: the Capitol, where she will demonstrate until she is arrested. And she will do the same thing for 14 Fridays — until she has to film another season of the television drama “Grace and Frankie.”

The WaPo has deemed her "the Greta Thunberg of the octogenarian set." And she credits the teenage climate activist with her new call to action in the nation's capital. When she first heard Thunberg talking about climate change, "the urgency" to act "came into my DNA the way it hadn’t before.”

Thunberg's activism reached all the way to the United Nations this year, where she lectured world leaders for not treating climate change like a crisis. "How dare you!," she said once or twice. It was a bit much for some critics, including President Trump, who mocked her on Twitter.

She seems like a very happy young girl looking forward to a bright and wonderful future. So nice to see! https://t.co/1tQG6QcVKO

While Fonda is an accomplished actress with multiple Oscars and Golden Globes, her career has also been followed by controversy. In 1972 she became the face of political controversy when she posed on top of a North Vietnamese anti-aircraft gun. It earned her the nickname that's stuck ever since, "Hanoi Jane."