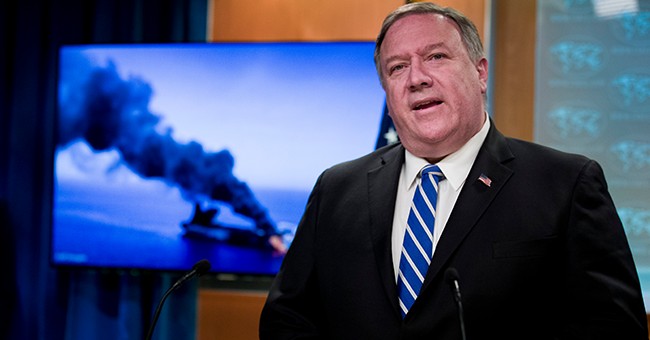 On Friday morning, Iranian President Hassan Rouhani made the surprising claim that the U.S. offered to lift sanctions against the regime if it would speed nuclear negotiations.

“The German chancellor, the prime minister of England (Britain) and the president of France were in New York and all insisted that this meeting take place. And America says that it will lift the sanctions,” Rouhani said on his official website, according to Reuters. “It was up for debate what sanctions will be lifted and they (the United States) had said clearly that we will lift all sanctions.” (CNBC)

Statement from Hogan Gidley: “This is a flat out lie. Rouhani wanted President Trump to remove the sanctions and end the maximum pressure campaign, and the president told them ‘No, absolutely not.’ https://t.co/GEqEsgosaS

And President Trump confirmed it.

Iran wanted me to lift the sanctions imposed on them in order to meet. I said, of course, NO!

In fact, just last week, Trump ordered a new round of sanctions against the regime after obtaining evidence that it bombed a major Saudi Arabian oil field.

"These are the strongest sanctions ever put on the country," Trump said. "We are at a level of sanction that is far greater than ever before with respect to Iran."

The regime denies having orchestrated the bombing, but the State Department says all the evidence points in one direction.

"In a failed attempt to disrupt the global economy, the Islamic Republic of Iran attacked the Kingdom of Saudi Arabia," the State Department said in a press release. "This act of aggression was sophisticated in its planning and brazen in its execution. Regardless of transparent attempts to shift blame, the evidence points to Iran—and only Iran."