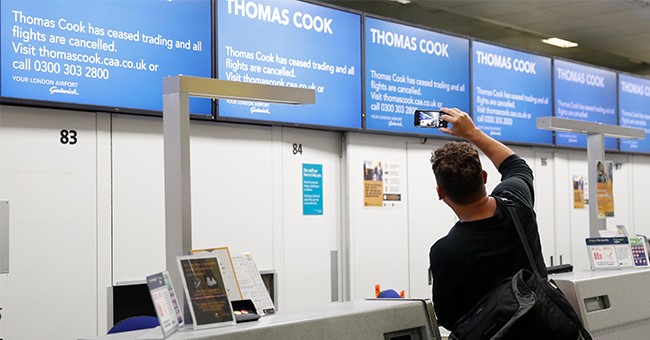 Travelers around the world were surprised to see the following announcement this morning. Thomas Cook, a British tour company which just happens to be the oldest in the world, suddenly went dark.

Thomas Cook Group, including the UK tour operator and airline, has ceased trading with immediate effect.

All #ThomasCook bookings, including flights and holidays, have now been cancelled.

The struggling company tanked after the UK government refused to hand over a £250 million bailout. As a result, we have about 600,000 people with disrupted travel plans.

The UK Civil Aviation Authority is determined to not leave them stranded for too long, as they prepare to issue repatriation flights via aircrafts from other operators.

“Every single person will be brought back home at the end of their holiday," CAA Chief Dame Deirdre Hutton promised.

Thomas Cook's chief executive Peter Fankhauser said the firm's collapse was a "matter of profound regret." In addition to putting a dent in thousands of individuals' trips and ruining at least one wedding, the Thomas Cook collapse also threatens upwards of 22,000 jobs around the world.