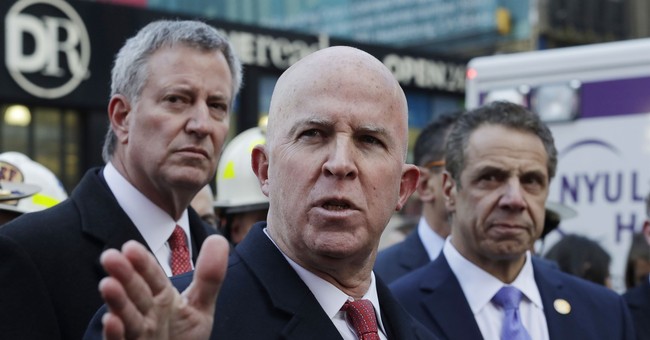 New York Police Commissioner James O'Neill announced in the city on Monday that Officer Daniel Pantaleo, who placed Eric Garner in a fatal chokehold after he resisted arrest on July 17, 2014, has been fired. O'Neill said Pantaleo had the choice to release the chokehold, but chose not to.

It is an immediate termination, the commissioner explained. O'Neill expects that many people will disagree with his decision, but he believes it was the right one based on court testimony and evidence.

Pantaleo arrested Garner in 2014 for his alleged sale of "loose" cigarettes and chose to use force when Garner began to pull away from the officers. The city erupted in protests following his death. The controversy reached the 2020 Democratic debate stage last month when hecklers demanded to know why Mayor Bill de Blasio had failed to terminate the officer in the five years since Garner’s death.

O'Neill was somber throughout the press conference, reminding folks that being a police officer is "the hardest job in the world" in which cops have to make split second decisions that are then examined and scrutinized by people who have much more time to consider the decision.

A police officer's choices are "examined, scrutinized and second guessed - both fairly and unfairly," O'Neill noted.

He regrets how the confrontation with Garner unfolded. Police have legal authority "to use acceptable levels of force when necessary, or else police can't do their job," the commissioner explained, particularly if suspects verbally or physically resist arrest.

The street, O'Neill insisted, "is never the place to argue," adding, "That's what the courts are for."

The case of Eric Garner is by all means a tragedy, O'Neill said. A man has lost his life, and another has lost his career.

"There are absolutely no victors here today," the commissioner concluded.