Rep. Chabot Didn't Have Much to Ask Mueller...But He Had Plenty to Say to His Dem Colleagues 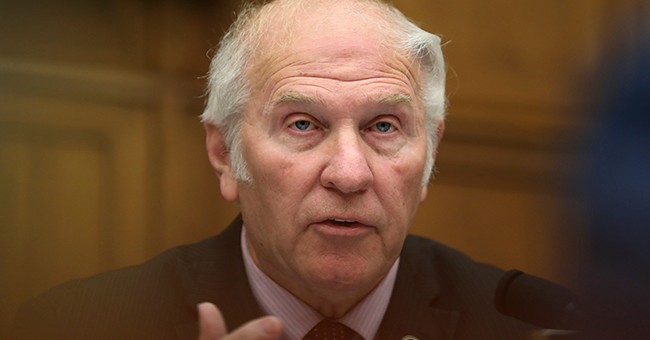 What exactly were Democrats hoping to gain at Wednesday's hearings with former special counsel Robert Mueller? They already have his 448-page report. He's already given a public statement about his conclusions. He's already said, matter-of-factly, that the Trump campaign did not collude with Russia to win the 2016 election. Yet, with a series of subpoenas, Democrats have dragged Mueller to Capitol Hill to try and squeeze some new information out of him that will incriminate President Trump.

And their Republican colleagues are sick of it. Rep. Steve Chabot (R-OH) didn't have many questions for the witness because, again, he already has hundreds of pages he can read on the matter. But he did have plenty to say about the Democrats on the House Judiciary Committee.

WATCH: @RepSteveChabot calls out the Mueller hearings as being really about Democrats' "last best hope to build up some sort of groundswell across America to impeach President Trump." #MuellerHearings pic.twitter.com/ZAIIfn7QSi

“My Democratic colleagues were very disappointed in your report,” Chabot told Mueller. “They were expecting you to say something on the lines of, 'here’s why President Trump deserves to be impeached,' like Ken Starr did relative to President Clinton back about 20 years ago.”

So, they shifted their strategy, which is why Mueller is sitting before them today.

Lots of buzz on Capitol Hill today. Not sure why.

I hear someone is testifying about a report that we already have, regarding Russian collusion that never happened.

As most agree, the special counsel's stuttering, bumbling, cringeworthy, and recycled performance did Democrats few favors.