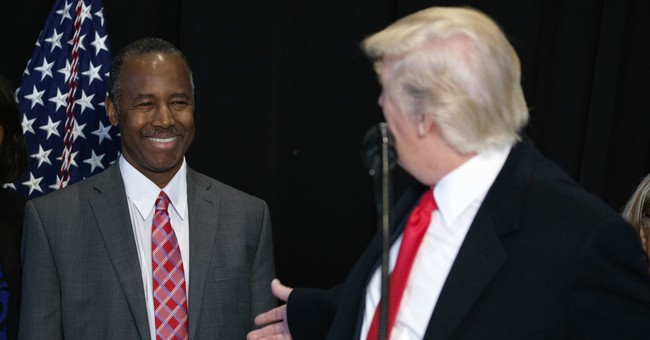 President Trump is "not a racist," Housing and Urban Development Secretary Ben Carson said on Fox News on Wednesday.

“I have an advantage of knowing the president very well, and he’s not a racist,” he insisted. “His comments are not racist, but he loves the country very much. And he has a feeling that those who represent the country should love it as well.”

Instead of obsessing over Trump's tweets about the progressives, Carson suggested we should be spending time focusing on how he's tried "to elevate" our society's most vulnerable.

For instance, he noted that under Trump, black unemployment has hit historic lows. Carson was also excited to have been given a platform to pursue opportunity zones. Introduced with the Tax Cuts and Jobs Act in 2017, opportunity zones offer special tax breaks to companies that invest in the roughly 8,700 low-income zones that state officials have designated.

Carson had a direct message for "the Squad" too, by addressing his own personal struggles as a minority in America. He grew up poor, but his mom never let him feel sorry for himself.

"My mom helped me realize I’m not a victim," he said. "I had access to all sorts of things."

That's why he's excited about his current position. The policies the Trump White House is now espousing, he said, deal with "creating self-sufficiency in people."